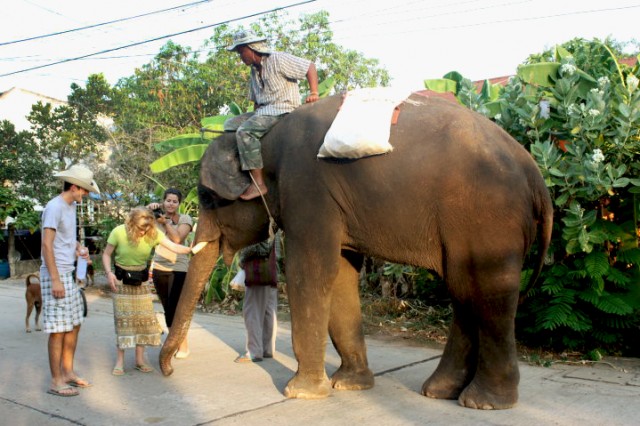 A month can go by in the blink of an eye, whether you are working, going to school, or doing everyday chores. You may even commute home and not remember the drive, but only that you arrived safely.

The month I spent abroad in Thailand in 2010 rattled me from the mundane and into the present with unforgettable experiences. As a senior in high school I had no idea which path to take as an adult. I couldn’t even begin to wrap my mind around college because I didn’t know what to study. However, I had a gnawing curiosity and passion to see the world. A few friends of mine had traveled with a cross cultural communications program. So I picked up the phone and made a few calls. The people I talked with told me I could only bring a backpack full of essential clothes and toiletries. At that time, I loved fashion, jewelry, and makeup. I found myself questioning if I could survive wearing jeans, t-shirts, and tennis shoes every day. I decided to give it a go. I never was one to walk away from a challenge.

After a 24 hour flight over the teal ocean and then the ice blue arctic I arrived on the solid ground of Thailand.

Heat hit my smiling face when I stepped off the plane along with the sweet smell of jasmine in the air. It was 120 degrees, and a rose colored fog shaded the horizon. Up to this point in my life, I had never been abroad or really ever traveled much in the states either.

Growing up, my family never had much. We never went on vacations, just to the city beach in the summer. I had never even been on a plane. My mom raised my sister and I and worked full time. In the back of my mind I felt like I was missing out on something, maybe luxury. I wasn’t really sure what that was, but I wanted to know.

Nothing could have prepared me for the real poverty I encountered in Asia.

It was scary to realize the risk many children were in. Bangkok, Thailand is known as the sex trafficking capital of the world. Yet little girls run around alone on the streets without parents and unaware of the danger. It made me angry at the parents, and I felt a protective justice gnawing at me. In fact, many parents sell their daughters into slavery to pay a debt.

The children, with smiley dirty faces, were desperate for attention. I knew what it was like to be overlooked. Don’t most children of struggling single-parent families? I made it my mission not to miss a moment and to give the girls all of my attention. Their condition forced me to put my own experiences into perspective. 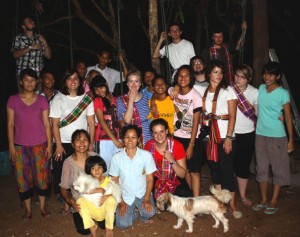 I was struck by the Thai people’s warmth and generosity as well. I was traveling and working with a group, who originally were complete strangers, but soon turned into family from our experiences together. Some of the families the group and I stayed with had no shoes or real income to speak of. Yet they opened their homes to us and fed us. A particular family began preparing dinner for us while it was still morning. The women would all gather outside the house and lay out mats on the ground to chop the fruits and vegetables on. Painstakingly, they cooked the spicy and flavorful food over a small fire. I can honestly say it was some of the best food I have ever had!

On one particular occasion this family served us fish. The family joyfully told the group and I that it was an honor to eat the eyeball of the fish; they wanted to give us this honor. I volunteered and smiled while I swallowed the gooey eyeball quickly. How could I show disrespect when they cared so much and worked so hard to prepare our food? Experiences like this challenged me to step out of my comfort zone. 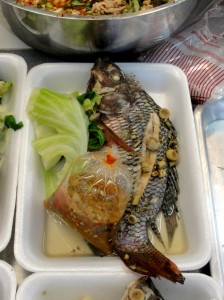 Cassie, one of the women on our team was having pain in her stomach for a few days. In the night I was woken up by a hushed voice asking me to follow. Startled, I slipped out of bed and soon found Cassie hunched over and being led out of the house to the hospital. Her husband asked me quietly, as to not wake the others, if I would watch their baby through the night. In confusion, I agreed. I had never watched children that young before in my life and I didn’t really know what to do. Their room was next to the stairs and had no doors, only curtains in the doorway.

We all slept on mats on the floor and this meant there was no cradle for the baby. Sleep deprived and exhausted from the heat, I struggled to deal with my own fear for Cassie and also keep the baby asleep and away from the stairs throughout the night.

In the morning, we hurried to a dingy hospital without air conditioning so Cassie could say goodbye to her son before an emergency surgery. Her appendix had near exploded through the night and there was no other option than to undergo surgery in a lackluster hospital, making no promises.

My emotions were raw after a long night. Then I saw the Thai family that was caring for us had kept vigil through the night for Cassie and slept on the floor of the hospital. I was so impacted by their love and perseverance. I did some soul searching and thought about whether I would have done the same thing for a foreigner back in the States.

Saying goodbye wasn’t easy. I knew by the connections I made that my time had impacted people’s lives. It wasn’t until later that I realized how much these experiences and many others changed me and how it would shape my life today.

On the ground a sunset lasts just a few minutes. Somehow my team and I had the privilege to stare for hours as our flight back home chased the burning orange and pink sunset. It seemed to last forever. Time flew by so fast for me before I traveled, but my time in Thailand seemed like the sunset, to escape time.

Today, I believe moments have more meaning to me. It has been four years since I traveled to Thailand. I value the privileges I have here in America and also my relationships more than I did before my trip. However, at the same time I long for the adventure and opportunity Asia offered.

One thing is for sure, the way I live my life is influenced greatly by my encounters there. As a journalism major and hopeful international journalist, I aspire to bring more awareness of the tragedy and beauty of countries so different from the U.S. I’m not sure if I would have the drive I have today for school or the clear view of my future career if I hadn’t crossed the border into Thailand.