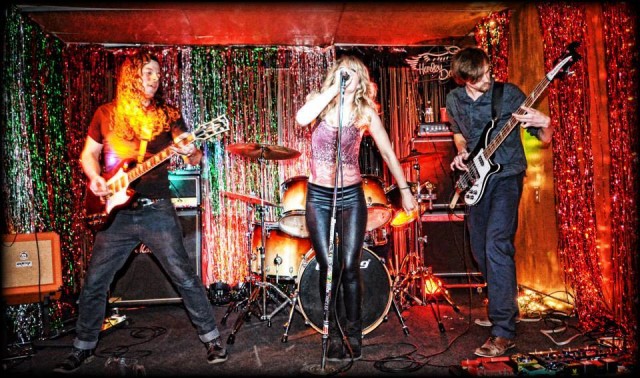 Many music lovers often aspire to be great singers or musicians. They may get some friends together to jam out in the garage, replicate all the songs of their favorite band on guitar, sing all the time, or have starry-eyed dreams of performing on stage. For many, this is only a fantasy. But for a select few, this is something very real. 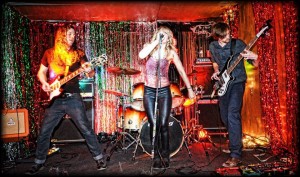 Recently I sat down with Abbey Leonard, a student and tutor at Grand Rapids Community College, to discuss her band “Remedy Blue”.

Q: What are the names of your band members and what are their roles?

A: “Bill Jara is our drummer, Matt Funk is the bassist, Jeff Armstrong on guitar and me, Abbey Leonard, as the vocalist.”

Q: How long have you been playing in bands?

Q: How did you all meet, and what was your first show like?

A: “I met the guitarist in high school through a mutual friend and then we started playing together. I met Bill, our drummer, at one of the shows I was playing before we were all together. Bill knew Matt Funk, who would become our bassist, and we all played live at a bar in East Town without ever rehearsing with Matt, so I was a little nervous. But as soon as he started playing it made our songs sound so different, and I loved it.”

Q: How would you describe your style?

A: “Our style is mostly rock, but it’s hard to elaborate. We come from so many influences and our style is always changing. We use to be very ‘throw-back’ in our style, but a few years ago we broke up, and then we got back together almost a year ago and made one rule; no throwbacks. A lot of our style also comes from our band members. Our drummer is really into metal, our bassist is very much into progressive rock and I’m really into Fleetwood Mac. So we kind of blend our influences all together.” 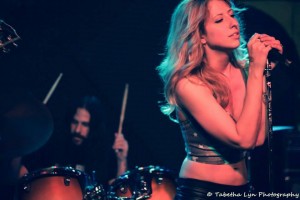 Q: I understand that your husband Benjamin is also in a band, how did you meet him?

A: “Well I met Ben in Hollywood when I was living out there, getting involved with the music scene. He actually messaged me on Myspace and said ‘Hey our bands should play together sometime’, but I actually thought he was…creepy *laughs*. I’ve had a bunch of guys in bands hit on me, so I was very skeptical. The first time I met him my producer introduced us and I loved his smile, it was so genuine, and his personality was amazing and not what I expected. We were friends right away.”

Q: Would you say your husband is your biggest supporter?

A: “He really is. He knows all the words to our songs, he stands up front at the shows and he nods along. It always helps, because you don’t always feel comfortable on stage and you constantly have to be somewhat outgoing, it can wear you down. So when I see him while I’m on stage it’s like the stress doesn’t matter and I feel at peace.”

Q: How often do you practice? Was it hard to get used to each other during your practice sessions?

A: “We try for once a week, usually for about three hours. At first when we started we were very hardcore about practicing, but now we’ve gotten used to each other’s rhythms and play styles. After all that time practicing we’ve been able to sync-up so much easier. It’s much more fun and I have to say I enjoy it a lot more now than when we started. It’s almost effortless.”

Q: Do you perform often?

A: “We usually play monthly. If you play too often it feels like it loses its touch. When we first started we would play weekly and all around Michigan. Detroit, Kalamazoo, you name it. Every weekend we were somewhere different and sometimes we would play near-empty shows, but it gave us a lot of experience.”

Q: Do you have a routine to help you prepare for shows?

A: “Honestly, no. To me it feels effortless, I’m just ready. One of our shows recently I fell asleep on the couch waiting for us to go on stage, which is so different from how I was. I used to be a little anxious and had to really prepare. Now I can just get up and perform, which is so much more fun.”

Q: Are there certain aspects of being in a band you dislike?

A: “I don’t really enjoy the business aspect of it, because there is a lot of pressure. It’s so competitive and I wish bands would band together more. The music scene changes, too. Sometimes people don’t come out to show support, or you’re performing alongside another band that might be rude. I’m glad that the music scene is improving in Grand Rapids and everyone is going out to shows and encouraging bands.”

Q: Where do you see yourself in a year with your band?

A: “I’m planning on moving to Lansing within 3 months. So we thought about staying together and playing shows every six months, recording stuff and sending to each other, or getting together infrequently. We don’t have any solid plans and I think that works out the best when you’re dealing with music.”