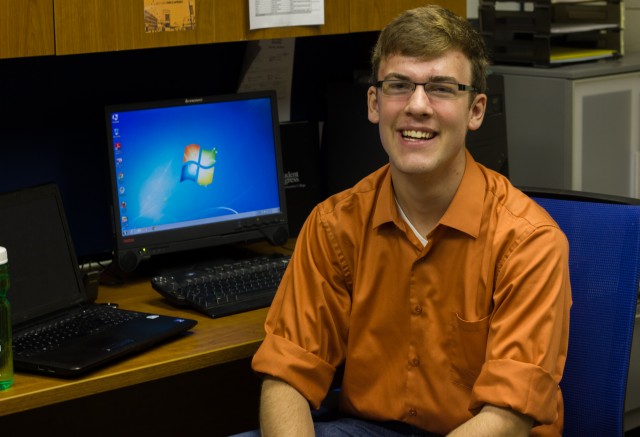 Campus Activities Board (CAB) is a part of Grand Rapids Community College to provide entertainment to students while on campus.

The primary goal is to make a two-year school have a four-year university feel to it.

Brandon Sinclair, CAB’s new President, has been selected to continue to lead the board, and encourage students to get involved on campus.

“I was a general member of CAB last year as a freshman,” Sinclair said. “I saw that my classes did not have that much interaction in them. I joined CAB, as I saw that it was good get away from that.”

Due to budget difficulties, Sinclair said the group had to change around their planning on several events for the upcoming year.

The group is hoping to put on a few special events for GRCC’s 100th anniversary celebration as well. “We are looking at rolling over a few thousand from last fiscal year,” Sinclair said.

“We are hoping to pull those funds into an event, being the President’s Ball. We kind of want to mirror that after Grand Valley’s President’s Ball…We wanted to develop a few new events.”

Sinclair said he is determined to find out if students would be interested in this kind of an event.

“There is a part of our budget we share with Student Alliance,” Sinclair said. “The President’s Ball is one of those things we would like to have a joint effort in. We proposed to them donating $20,000 to get a DJ, food, space, things of that sort.”

“We are strongly considering it because it gives the entire school an opportunity to interact with the president outside of the town hall meetings and board of trustee meetings,” Brown said. “We are still gathering ideas from fellow students so we can better solidify that decision to go forward with it or not. We want to get the overall feel of the students to see how they will react to this.”

Sinclair also said they would be cutting back on some events throughout the year that they felt like they may have done too much of in the past, or felt like they wanted to replace with a different event.

“We analyzed events like Raider Flix, and Harvest Day from last year, where we looked at exactly what we spent… and the participation, to see if it was cost effective,” Sinclair said. “Harvest Day won’t be happening. Raider Flix will happen once or twice a semester still. We want to put a little more money into our finals relaxers. Something we would like for us to get to …[is] a mid-term relaxer. While students are getting really stressed, we want to give them a reason to stay on campus and have some fun.”

Sinclair encourages students to get involved on campus, as ultimately that is the message of CAB.

“I like to help connect other students with clubs and what interests them the most,” Sinclair said. “Give them a reason for being on campus. I think there is a lot CAB has to offer, not only are you planning the events, but you are actively in the group working for solutions on planning those events.”

The general meetings for CAB are from 4:30 to 5:30 p.m. on Tuesdays from during the semester.

The first official event CAB will be putting on for the fall semester is Welcome Week, starting Sept. 8.