Grand Rapids Community College will be celebrating its centennial with the production of “Open Door”, a time-traveling adventure spanning the 100 year history of GRCC.

“The main character is girl named Jill. She’s starting her first day at GRCC and she doesn’t want to be there at all,” said Walter Lockwood, one of the writers of the play and a retired GRCC English Professor. “She can’t find her first class, she’s frustrated and she stumbles upon a door that says ‘enter at your own risk’. Well, she goes through it and ends up in the first class of Grand Rapids Junior College in 1914.”

Jill is helped through her adventure by Jesse Davis, the first president of GRCC and its founder, who serves as her all-knowing guide.

“We’ll be covering all the history from 1914 to the present,” said James Schafer, one of the writers and GRCC’s video broad- casting coordinator. “Well, all the history we can fit in 90 minutes,” Schafer added, laughing.

Casting for a play about the 100 year history of GRCC will likely be drawn from a large pool of student and alumni actors. Michelle Urbane, one of the directors and the manager of Spectrum Theater, discussed her plans for the cast.

“The ensemble will most likely be made up of current students, we’re hoping to get four males and four females to play multiple
parts throughout the play,” said Michelle Urbane, “The roles of Jesse and Jill will be played by two of the six alumni actors we’re looking to cast.”

If you’re wondering where the notion came from to do a time-traveling play about the history of the college, it has a familiar beginning.

“Well, we were sitting in my backyard, having a few beers,” joked Lockwood,“and the idea of the time-travel premise just came to me. The founder Jesse is really worried that the college won’t last another year, so Jill has to prove to him that GRCC will not just survive the next year, but will last 100 years.”

The play will also include a live five-piece band from the GRCC Music Department that will perform era-specific music. GRCC alumni will also perform the live vocals.

“The music department is really into this big time,” Schaefer said. “The first music starts in the 20’s with jazz and “The Charleston”, going through the 60’s and the popular music of that time, and there’s 80’s songs thrown in there too. There’s enough there if you were going solely based on the music.”

With a play that includes historical Grand Rapids natives, the writers didn’t want to leave out anyone major from our current time, including GRCC’s president.

“Steve Ender will be portrayed, we even wrote a singing part for him,” said Lockwood, as Schaefer and Urbane started laughing.

Walter Lockwood sums up the synopsis of the play as preserving what’s important to the community and keeping GRCC as a continuing place of excellence.

“This place, which I discovered while studying its history, is so much more than I ever knew,” said Lockwood. “That’s what the main character Jill discovers. By the time she’s done with her adventure she has focus and she knows she wants to be here. She’s found out what kind of history of excellence built this school, and how it continues to develop into something more.”

“Open Door” will be performed at 8 p.m. on Nov. 7 and 8. Ticket prices are $25 for the general public, $20 for senior citizens, and $15 for students. The show is located at GRCC’s Spectrum Theater, 160 Fountain St. NE. For more information and ticket purchases, please visit www.grcc.edu/ theatre. 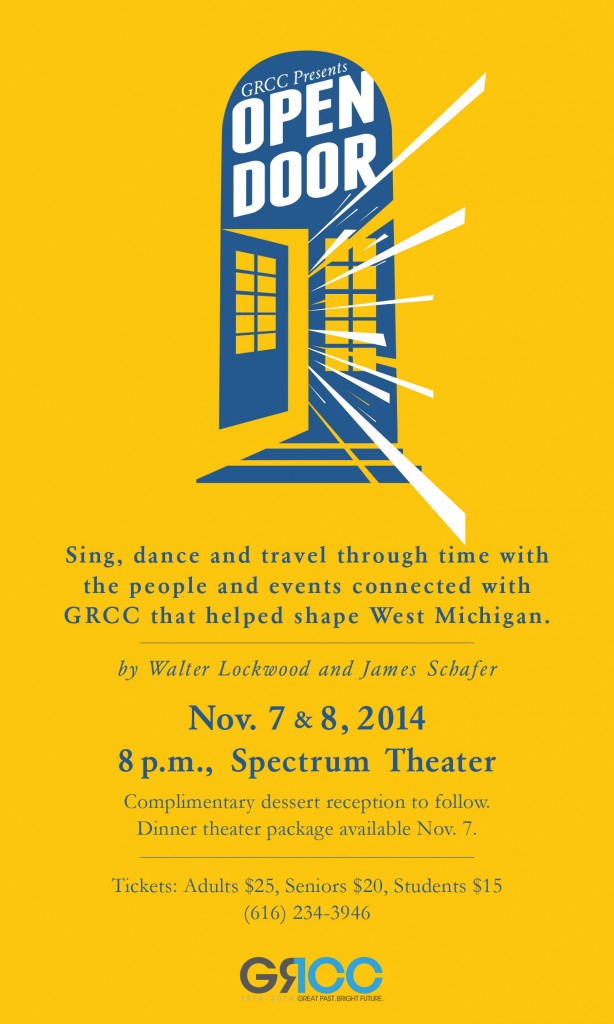