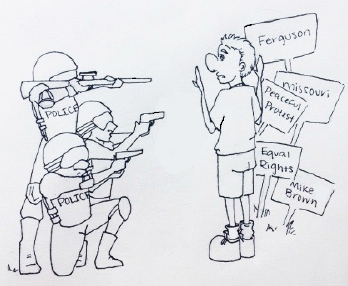 If you have access to the news (or any social media at all) then you’ve heard about the police shooting of unarmed black teenager Michael Brown and the subsequent protesting and rioting in Ferguson, MO.

The debate is whether Michael Brown was threatening the officer’s life prior to him being shot six times. One side is demanding the arrest of the police officer Darren Wilson, the other side is demanding he be protected and believes he did nothing wrong. Old battles of race, class, and the demand for justice are being fought. However, I think the greatest problem happening is the militarization of our police forces throughout the country.

Is this what America has come to? Do we tear gas all the protesters simply because a small minority of them were looting? Do we fire rubber bullets into masses of people, regardless if they’re breaking the law? Do we detain journalists for no reason, simply because they’re doing their jobs?

I’m sick of it. I’m sick of police brutality and the excuses that are made for unlawful behavior, simply because they’re law enforcement. When we start arming the police like soldiers, they’ll start behaving like soldiers. Soldiers are meant to find threats and neutralize them with lethal force, police are meant to enforce the law and to serve the public that they’re protecting. There is a high risk to law enforcement. Police must accept that risk, not completely neutralize it.

In our hyperbolic society, you’re either framed as being completely with the cops or you hate them. I’m against excessive force and unlawful killings (against any race), but I don’t hate police officers. I recognize their risks and the dangers they face every day, simply from doing their jobs. This does not mean they should exercise their authority with impunity. If our tax dollars are paying their salary, then they should be under greater scrutiny from the public.

It’s “protect and serve”, not “seek and destroy.”