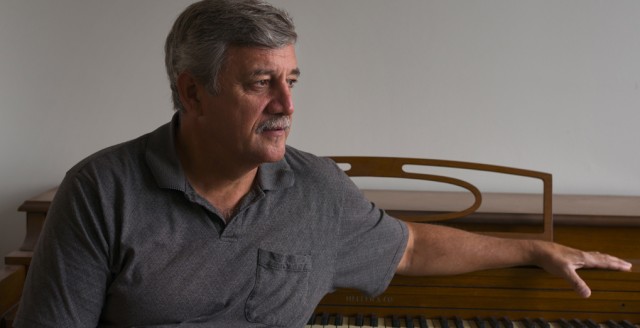 It’s the first day of the semester at Grand Rapids Community College. A classroom full of students wait in silence for their professor, Bernard Manker. The minutes slide by. Then, the door flings open, and a very stern looking man strides to the front of the class, and begins speaking fluent Spanish. Everyone stares, stuttering, trying to decipher what this man is asking of them. A few begin calculating if this class is worth taking the hit to their GPA.

“At first, I was nervous because I couldn’t understand his sense of humor,” Karlee Breckenridge, a sophomore from Manker’s Spanish 102 class, said.

Now, fast forward to final week of the semester, and take a peek into Manker’s class. Students are laughing with him now at inside jokes they would never be able to explain to an outsider. Although no one is exempt from Manker’s teasing, each student takes it in stride, even daring to shoot a few retorts of their own. One of the most exciting parts of class is when students get the chance to hear about Manker’s experiences as a child abroad in Spanish-speaking countries, and how those experiences shaped his life and career path.

The Manker family moved to La Paz, Bolivia from Bay City, Ind. when Manker was only 5, due to his father’s job as an English teacher working with the United States Information Agency at a binational center. The center’s goal was to encourage what Manker calls an “educational exchange” between the United States and other countries.

“My father…worked along with ambassadors (and other representatives),” Manker said. “His job was to teach (other countries) about English and American culture, believing that the greater understanding we have (of each other), the less likelihood there was of conflict,”

After living in La Paz from 1957 to 1959, the Mankers spent two years each in Managua, Nicaragua and Valencia, Spain before returning to the United States in 1963. For almost anyone who has even moved down the street, the idea of making four international moves in the span of six years seems overwhelming, especially if the move also involves taking along not just one, but three young children: 3-year-old Sally, 5-year-old Bernard and 6-year-old Hagen. However, Manker doesn’t recall the moves being particularly stressful.

“My parents did a very good job at letting us know who was in charge and that they would protect us and keep us safe,” he said.

Some might assume moving so far so often would take a toll on the Manker children’s friendships, both because of the short time that they were in one place and the potential for cultural confusion.

“My siblings and I are all fairly close in age, so we kept each other company,” he said “We also made friends, but we also knew that it wasn’t going be a forever friendship because we were only going to be there for two years. In Bolivia and

Nicaragua, we were a little insulated from (cultural confusion) because we went to an international school with American, British and Australian kids, mostly.”

Because of this tight sibling bond, most of Manker’s stories about his childhood adventures involve them, as well as a fair amount of trouble. They range from playing and losing- marbles against his Nicaraguan neighbors to him and his brother taking a cab into downtown Managua to go see movies and later re-enacting them at home.

“Can you imagine, in Grand Rapids, a 10- and an 8-year-old jumping into a cab?” Manker laughed.

It wasn’t until the Manker family moved to Valencia, where there was no international school to provide a degree of separation from Spanish culture, that Manker admits to experiencing any degree of culture shock.

“When we got to Spain, we had a couple of cultural things happen,” Manker explained “As my dad said, it felt like everybody was yelling at you all the time because of the way they speak…They also are a little bit abrupt with ‘how do you not know that?’ and stuff like that. Some of the vocabulary that we used in Spain was completely unacceptable and foul in Latin America. We thought it was funny, my brother and sister and I.”

Like most children would, Manker also recalls feeling homesick.

“As I got older, I wanted to be in the United States more. It was a thing I didn’t have a choice about, but I missed having hamburgers and milkshakes and friends.

I just wanted good old American food, because the food was a huge change for us,” he explained. Upon returning to the U.S. in 1963, Manker recalls having to make adjustments to acclimate back into American culture.

“The activities I participated in were completely different,” he described “(While I was abroad,) I didn’t listen to music, I didn’t have any idea of what was popular. The first time I came to an American school was in sixth grade, and everybody else knew cool stuff and I didn’t know anything: music, TV, reading, even my history and geography of the United States. I didn’t know that because for the last two years, all I’d study was Spanish history, Spanish geography, Spanish literature- Spanish everything.”

After graduating from Wabash College in Crawfordsville, Ind., Manker taught in the Bilingual Program for Grand Rapids Public Schools, eventually making the move to GRCC. Here, he became the head of the Language and Thought Department. “He led the department in a lot of good directions, and was very supportive in fighting for the people of the department and intervening on their behalf,” Hillery Haney, a French professor who met Manker while they were both teaching for GRPS, describes.

There is no question that Manker’s experiences shaped his career path, but Manker says that his time abroad affected him on a much deeper level as well.

“As a child, I didn’t like it very much…but now, as an adult, it has informed everything that I’ve done in my life,” Manker said. “One of the things that is true is that we don’t know which experiences in our lives are going to affect or drive something else…International travel and living abroad is a way of life for (my family).”

Although he knows that traveling is not something everyone enjoys, he does have some very strong advice for anyone who is interesting in traveling, studying or living abroad.

“Go as soon as you can and stay as long as you can,” he recommended. “If you’re gonna go, stay for as long as three months, four months, six months, a year. The truth is, whoever goes is going to come back a changed person.