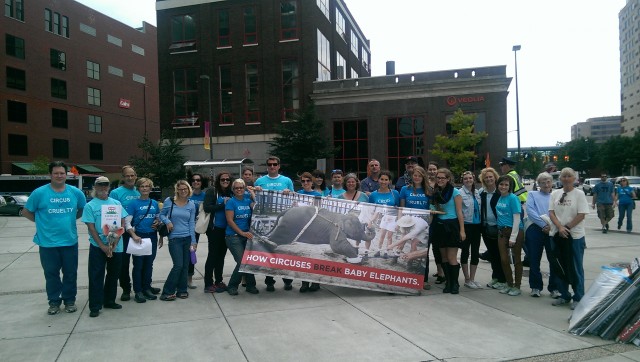 The Ringling Bros. & Barnum and Bailey caravans took over the Van Andel Arena parking lot for this weekend’s circus. But they were not the only ones making themselves noticed. Over 100 protesters gathered in front of the Arena sporting blue T-shirts displaying the words “CIRCUS=CRUELTY” and graphic posters of animals being harmed.

Grand Rapids for Animals, a local animal welfare group, has been protesting the circus for 12 years. This year they collaborated with End Circus Cruelty, a more specific organization also based out of Grand Rapids.

“We’re out here basically to bring awareness to the cruelty in animal entertainment, the circus specifically,” said Karen Tracey, founder of Grand Rapids for Animals.

End Circus Cruelty, led by Jon Dunn and Kolene Allen, is working on getting signatures to enact a citywide ban on animal cruelty in the circus through the city commissioners in both the Grand Rapids and Walker. To sign the petition, visit endcircuscruelty.com.

Van Andel Arena representatives declined to comment on the protest and circus officials could not be reached for comment. However,the Ringling Bros. website does feature a section about the Ringling Bros. Center for Elephant Conservation. This can be found at ringling.com.

“We feel Grand Rapids is a progressive city…why are we supporting animal cruelty?” Tracey said. “You don’t need to have animals to have entertainment. They’re wild…they don’t belong performing unnatural tricks and being in cages.”