Grand Rapids Community College administrators are moving ahead with plans to assume ownership of the patch of land between the Bostwick parking ramp and the Main Building and Cook Hall, otherwise known as the Juan Olivarez Student Plaza. 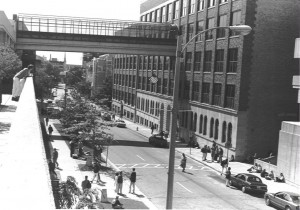 The former roadway, which has been closed for more than a decade, is under an encroachment agreement between GRCC and the city of Grand Rapids to allow for a common area that students can walk and gather in.

GRCC has recently decided to take ownership of the land. On Aug. 28, a lawsuit was filed in Kent County Circuit Court to officially take possession of the land.

GRCC and the city of Grand Rapids have had the encroachment agreement since March 31, 1999, which allowed for the street’s closure and installation of landscaping in the plaza, according to Lisa Freiburger, GRCC’s Vice President for Finance and Administration.

“There will be three costs,” Freiburger said. “We will need to work with the city. The city will charge for their engineering related services, and we will work with legal counsel…and there will be some survey work required.”

Freiburger said she thinks this is a natural progression for GRCC.

“We do not have any specific issues,” she said. “It is just better all around if we make that agreement permanent. It is an important part of our campus, as it is the center of our campus. We want no risk in the future that it may be turned back into a street.”

Freiburger also said while the lawsuit is part of the process of owning the land, they are working with the city.

“They are on board with this,” she said. “In fact, it was approved by the city commission back in May. This is just a step in the state-defined process. The next step is we just need to notify the neighbors within 300 feet.”

Catherine Mish, Grand Rapids City Attorney, said that is a very routine process that GRCC has been going through.

“The city has been working with the school,” Mish said. “This is just the process that they must go through to own the land.”

The court file stated that the land has not been used for anything other than pedestrian reasons in many years.

Right now GRCC is still notifying anyone who lives within 300 feet of Bostwick Avenue in order to move forward with the lawsuit. The case is represented by Brion B. Doyle of Varnum LLP.