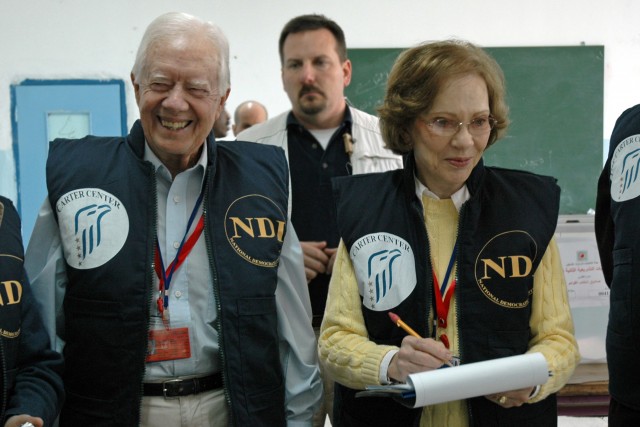 Jimmy Carter, the 39th President of the United States, and his wife Rosalynn will be speaking at Grand Rapids Community College today, and tickets have sold out.

The Carters will be giving a lecture at the Ford Fieldhouse at 5 p.m., as part of the Diversity Lecture Series, with a book signing for the president’s book, “A Call to Action,” before the lecture, starting around 3 p.m. A private dinner, prepared by Sechia Institute students, is planned in the ATC banquet room following the lecture.

GRCC President Steven Ender is the person responsible for bringing the Carter’s to campus, as part of the 100-year anniversary celebration. He said an enormous amount of luck went into the series of events leading up to securing a stop at GRCC for the Carter’s. Ender referred to it as a ‘blue bird.’

“I was at an event and I saw a person that I know,” Ender said in a recent interview. “He introduces me to his friend.”

“I only know one Jimmy Carter,” Ender said, and he asked the man, “Are you talking about the former president of the United States?”

The man went on to explain that he did know the former president and is in fact a major contributor to the Carter Center, and was able to get Carter to come to his alma mater and give a key-note presentation.

“My wheels are really spinning now,” Ender said. “This guy seems to really have a relationship that could be helpful to the college. Then I proposed…next year is our 100th year and the 20th year of the Diversity Lecture series, I can’t think of anything more fantastic than to have a former president, especially Jimmy Carter, and what he stands for today globally, presenting at our lecture series.”

After months of negotiations it became clear that it was actually going to happen.

Ender Ender was scheduled to meet Carter for the first time Sunday night, and has been looking forward to today’s event, with great enthusiasm, for quite some time.

“It’s going to be an interesting afternoon (and) evening,” Ender said.