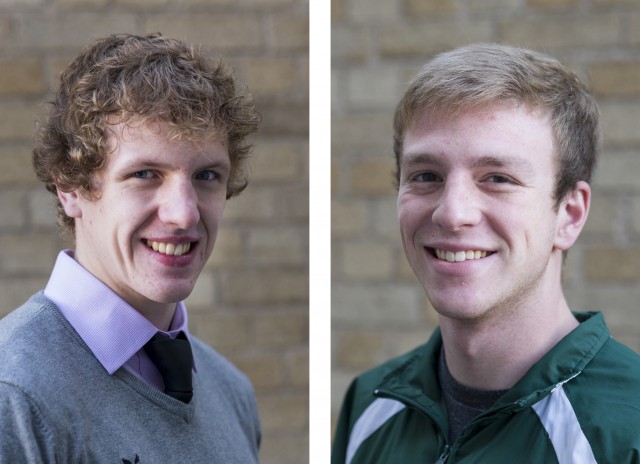 Two Grand Rapids Community College students will be dining tonight with President Jimmy Carter and his wife Rosalynn at the reception that will follow tonight’s kickoff of the 20th season of the Diversity Lecture Series.

The reception will be attended mostly by the Diversity Lecture Series and GRCC donors. Two GRCC honors program students will be seated at the same table as the Carters for the reception.

Dan Eggerding, 19, of Comstock Park, and Noah van Hartesveldt, 19, of Grand Rapids were selected to be seated with the Carters at dinner tonight. They earned this by winning an essay contest for honors program and Phi Theta Kappa members.

The honors program at GRCC opened a competition in late August for any students in the program, or the honor’s society, Phi Theta Kappa, to enter. The rules were that they had to have read Carter’s recent book, “A Call to Action: Women, Religion, Violence, and Power,” and they had to write an essay response to one of their prompts.

Lynnae Selberg, honors program counselor, said several students entered the competition, and nine judges were given the essays with no names on them to help select the winners.

Eggerding said he recognized the essay contest as an opportunity for him to meet someone that he greatly admired.

“I myself am a democrat,” Eggerding said. “Carter is one of the few democratic presidents in recent history that is still alive. I thought to meet him would be a huge honor. I like what he stands for.”

Eggerding said that many topics and facts in Carter’s book stood out to him as important and need to be addressed by modern society.

“I think that he was very ahead of his time (during his presidency). I think that a reason why not very many things happened during his administration is because the public was not ready for his forward thinking.”

Eggerding said that he wrote his essay on what future members of society need to do in order to make the United States better.

“I thought of three specific things that I think any person who wants to be involved in bettering mankind needs to accomplish. Education, being a part of activism and petitioning, and legislative reform and policies were my points. You go to school to get educated. When you finish school you can be active, go to protests, and tell the government to persuade it and change the views of those elected to office. Their ideas influence legislation that is passed.”

Eggerding said that although he will probably not bring up any hot button topics during the reception with the president, he really wants to ask Carter what he thinks of Hillary Clinton.

van Hartesveldt was quite surprised when he found out that he won the competition as well.

“When I entered I definitely did not really think I had a good chance at winning,” van Hartesveldt said. “When I read the email, I was very surprised. I entered this once in a lifetime opportunity to meet someone of such stature, and has done so much with his life beyond the presidency, so I am excited.”

van Hartesveldt  explained how Carter’s book made him realize how different other areas of the world were.

“I was surprised by how much (the book) encompassed.  I was surprised that he covered so many aspects, talking about protecting all different types of people. It did have a heavy focus on women, and fighting for their rights and equalities, but there were other topics in the book that I really enjoyed as well.”

van Hartesveldt also does not plan on asking the president any hot button topics during the reception.

“I will probably ask him about more personal anecdotes regarding what he has done….and what really stuck out to him besides what he has already written.”

van Hartesveldt chose a prompt to discuss the difficulties of a world with all women or with all men, and what would be the benefits and disadvantages of such a society.

“Basically I just focused on how much men and women compliment each other, and how having just a one gender world would be really lopsided. There would just be so much missing. Men and women both contribute a lot to society. My essay focused on what the world would lack without that.”

Both essay winners started GRCC during the 2013-2014 school year, and both plan on transferring to a university after they finish their program at GRCC this year.

van Hartesveldt is an airspace engineer major, and has not decided where he plans to attend college next. Eggerding plans on transferring to Michigan State University for political science.

In addition to attending the lecture and reception, both winners will have their books signed, and have a picture taken with president Carter. Both of their essays will be read at the reception.