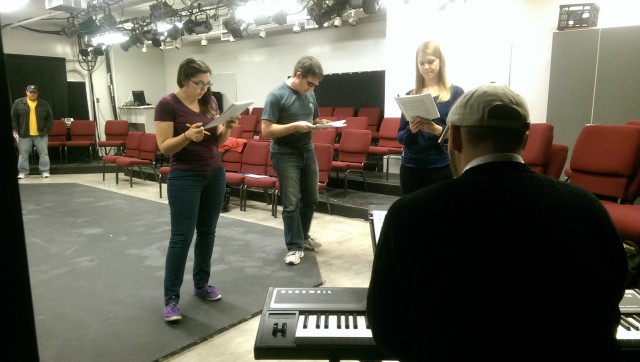 Set to a difficult rock score, “Chess” is a strategic drama set in the 1950s through the 1980s that centers around two talented chess players, one from Russia and the other from America competing in a international chess match. Underlining the metaphorical battlefield of the board game is a love triangle, political warfare and many other sub-conflicts.

Wayne Swezey, who is performing in his second production with Actors’ Theatre, will play the role of Freddie, the American chess player. “Chess” will be Swezey’s third challenging musical this year, next to his performances in “Sweeney Todd” at Circle Theatre and “Les Miserables” at Civic Theater.

“So far it’s come together pretty well,” Swezey said. “It’s very rewarding. It’s enough of a drama that can keep people on the edge of their seats.”

He hopes that the audience will understand the different levels of the game of chess in the show.

This is Mellema’s second time directing for Actors’ Theatre. Mellema also teaches at East Kentwood High School and has directed theater productions there and around Grand Rapids.

“I’m hoping that people are walking away surprised (that) not only do they love the music,” Mellema said. “(But) they like the clarity of the story.”

Actors’ Theatre has decided to take the difficult road in the upcoming production in having a downsized cast. “Chess” is normally made up of a giant cast and an orchestra to match.

Mellema said that, this time around, “Chess” is being performed in a smaller theater, with a smaller cast, and an even  smaller orchestra.

“We’re taking this beast of a show and we’re focusing it,” Mellema said.

The music of “Chess” features a rock theme as well as an ’80s pop vibe. Some of the songs also feature lyrics in Hungarian, which to Scott Bell, Music Director, is going to be the one of most difficult parts of the learning process.

After joking about the challenges of singing in Hungarian, Bell mentioned his plans to bring in a Hungarian speaker to help teach the actors the song.

“I’m thrilled that I’m getting a chance to (direct this show),” Bell said. “It’s an incredible score…It was actually a bucket list show for me.”

Three keyboard players, one guitarist, bassist and drummer will make up the pit orchestra, which completely changes the sound of the production in comparison to massive orchestras.

“The sound will be unique and different,” Bell said.

Bell is hoping that by having a scaled down cast, the audience will be able to connect with the characters more, as well as be fascinated by the musical aspect.