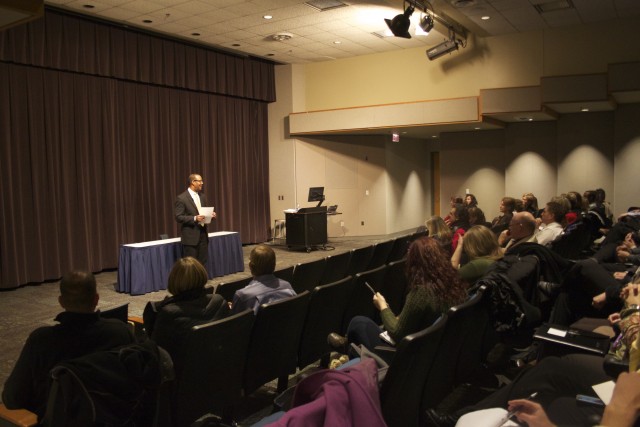 Tony Hawkins led the first candidate forum as GRCC takes its final steps in the ongoing provost search. Although no students were present at today’s forum, community members and faculty and administration made up the audience of around 100 people.

The provost position at Grand Rapids Community College has been open since the beginning of this year. A provost essentially acts as a chief academic officer, and helps oversee the college, making sure the administration has the students’ best interests in mind.

Hawkins resides in Washington, D.C. and has been Dean of Instruction of Humanities at Montgomery College for 10 years.

As provost, he would like to see more connection between secondary education and GRCC to educate high school students about college and spark an interest in college where there may not have been one.

“I also (want to) see that the student services will instill the skills necessary for students to become better learners, become better listeners and better participants in higher education,” Hawkins said.

Hawkins hopes to help eliminate the achievement gap in education, where student success is compared according to race, gender, and socioeconomic status. In relation, he encourages a more diverse faculty that students may better relate to.

Hawkins said his experience working at an urban college gives him reason to appreciate GRCC as a community college, located in the heart of downtown Grand Rapids. If he makes the move, he said he won’t be giving up anything but D.C. politics, and that’s completely OK with him.

“I enjoy the community here,” he said. “I enjoy the people (at GRCC). I can tell that everyone is very passionate about the work that they’re doing, about being here. There are people that have been here for a number of years…You just don’t find that anymore.”

Hawkins is proud of his relational skills among students and staff and plans to continue developing relationships with those around him at GRCC and supporting student life programs and innovations.

“The provost really needs to be a supporter of both students and the faculty and…what the students need and what faculty need and what the institution needs,” Hawkins said.

Nikki Banks, head of GRCC’s police academy and co-chair of the provost search team, was pleased with the turnout.

“We have a faculty and staff and administrators that are clearly invested in our future,” Banks said. “It’s refreshing to have the input of the campus at large.”

Hawkins was also pleased with the turnout and is excited about the chance to represent GRCC. He mentioned during the forum a phrase that remains constant in his life and his role in education.

“I bring a certain passion to education,” Hawkins said. “I want to be a brave and kind leader.”