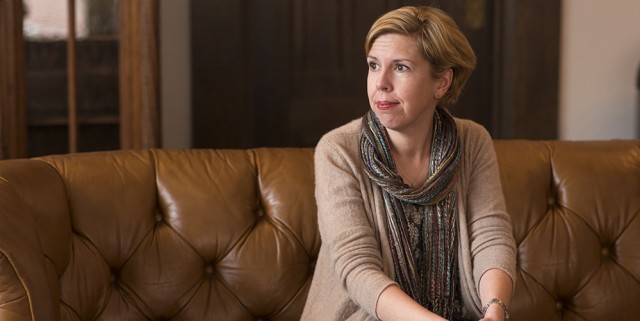 As a first-generation non-traditional college student who became the Assistant Professor of History at Grand Rapids Community College, Susan M. Williams, 41, has a perspective most students don’t expect to see in a typical professor, and a straight forward attitude to keep those around her on their toes.

Growing up in a working class family in the small suburban city of Mason just outside of Cincinnati, money was tight, but Williams’ family made it a goal every summer to travel some place new. To Williams’ excitement, many camping trips brought about pit stops at various U.S. historic sites along the way.

“I’d always been deeply passionate about history,” Williams said. “My parents really facilitated that in me.”

As a child, Williams surrounded herself with books, and the family vacations tended to center around whatever historic period she was binge-reading at the time.

“I was all over the place buying classic literature because I loved to read…history books or anything that you can imagine,” Williams said.

After graduating from Mason High School in 1991, Williams knew that history was a path she wanted to follow, leading her to the University of Cincinnati.

As a young, college freshman without any role models, Williams found herself miserably lost.

“I should not have been in college,” she said. “(I) goofed off constantly because I had no direction, and decided to leave after a year.”

Working in home healthcare and then Planned Parenthood, Williams’ found contentment in the social service field for the next six years.

Williams worked into her mid-20s before returning to the University of Cincinnati, this time with a strong head on her shoulders.

“I was the crazy student,” Williams said. “I had no patience for slackers.”

Taking 18 credits and working full time, Williams managed to get her Bachelor’s degree in History by 2001, in less than three years.

“I went back and realized ‘I want to be a professor’,” Williams said. “I want to teach college. I want to talk. And it was…my fantasy. I want to talk about history all day, every day, to hostage audiences that can’t get away from me. And I’ll make them like it.”

But time had passed and computers had emerged in education, a foreign concept to Williams who was still typing on a typewriter in the late ’90s.

“It was like a foreign language,” Williams said. Her first typed assignment turned into a silent plea for help.

“(The professor) took me under her wing and ended up being my mentor,” Williams said. “I was a student that went from having just an abysmal skill set to just working so hard to turn it around.”

She began her graduate degree at the university while also working as a teaching assistant.

“It’s a really good way to experiment with students and teaching and learning without really destroying the student experience,” Williams said. “Students would just kind of laugh along with me and they would realize that I’m new and I would be honest about it.”

Determined to cross the finish line, Williams moved onto the Indiana University Bloomington, where more teaching opportunities came her way. She finished the tail end of her coursework in 2003 with a Masters Degree in European History.

While attending Indiana University, Williams was awarded a Fulbright scholarship, a competitive research grant, to spend summers in Bucharest, Romania doing historical research for her dissertation paper, which would complete her Ph.D. She officially packed up and moved to Romania for a year in 2006.

Submerging herself in the city, Williams lived in a working class apartment, away from the American populated area.

“A lot of (Americans) would go live in the embassy sections of a city or the college sections and I kind of wanted to live where everybody else lived in the city,” Williams said.

Williams busied herself working at the Romanian archives, the Romanian National Library and the Romanian Academy, doing focused research on the identity of the Romas in the 1920s-’30s.

“I’d always try and book time to travel,” Williams said, although it was overwhelming living in a country that was completely unfamiliar. “Maybe sometimes the best thing to do is get lost and to try to find your way out of it…(and) start to enjoy that loss of control.”

Despite her initial feelings that Bucharest was not very aesthetically appealing, Williams sought out to find beauty in the seemingly dirty city.

“I have a willow tree in Bucharest,” Williams said. “It’s right by a lake, in a park, (and) I’m never going to tell anybody which park it is. It’s my tree. I know that tree. I could pick out that tree in a picture where they didn’t even say that it was Bucharest. I love that tree to this day.”

Williams completed coursework toward her Ph.D. in Russian and East European Studies and History of Gender and Sexuality. She later received a teaching position and decided not to write the dissertation, the last of the degree requirements. Nevertheless, she was the first in her immediate family to obtain a degree.

Coming back to the United States, Williams’ priorities changed from completing the dissertation paper to dipping her toes in the water for a teaching position.

“When I did that, I did not expect to get bites,” Williams said.

Much to her surprise, Williams answered a call back from GRCC and was asked to come to an interview for the only open position as History professor in 2008.

“Professor Williams was a perfect fit for GRCC and the Social Science Department,” said Mike Light, History professor and Social Sciences department head. “Her expertise and her dynamic teaching style, combined with her professionalism and scholarly background is a rare combination.”

Williams describes her teaching style to be flexible, but always lecture-based.

“I’m kind of a ‘what works’ professor,” she said. And based on her own experiences as a student, she veers away from group work in the classroom. Williams’ classes tend to revolve around the historical concepts she enjoys and wants to teach students.

Catharine Trachsel, 26, one of Williams’ former students, originally declared as an English major but has since added history to make a double major.

“Professor Williams is the reason I decided to go into history,” Trachsel said. “The level of expectation she has for her students is nothing less than their best, which is usually more than they thought they were capable of. At least that was true for me.”

“At least once a week, (I dump) coffee down the front of myself,” Williams said with a laugh. “That’s a norm in my classes.”

Williams is involved at GRCC as not only a full time professor, but in a handful of committees. In particular, she is the coordinator of the Gender Studies committee, which she describes as focused on “trying to deal with these really big, systematic issues (and) to explain where they came from and also what kind of influence that has on us today.”

The Gender Studies Committee does not only construct different courses, but also looks at how the college wants to be seen and how to handle the gender ‘climate’. On the same topic, Williams’ is also a member of the Lesbian Gay Bisexual Transgender Queer climate team.

“It’s really creating an inclusive campus climate, for those groups in particular,” Williams said, referring to the LGBTQ spectrum. The committee’s recent project has been the implementation of unisex bathrooms, and obvious signage for them, around campus.

Also devoting time to hosting conferences, Williams leans toward the evolving concepts of feminism and sexuality. She enjoys having these discussions with students and hearing what they have to say.

Over the years, Williams has team-taught Irish Foreign Studies courses and led several study-abroad trips in 2009 and 2010 to Ireland with fellow historian, Robert Hendershot.

“Williams is a very active member of our department and has contributed to the academic and professional development of GRCC in innumerable ways,” Hendershot said. “Most importantly, the college’s students are fortunate to be able to learn from an academic of her caliber.”

Next semester, Williams plans to teach the History of Gender and Sexuality (HS 225), and a seminar course entitled “The Black Death”, which will take a historical as well as a microbiological look on the fatal epidemic.

Williams said that one of her goals for the future is to make gender studies a discipline at the college, see action towards making the campus more inclusive, and the implementation of pre-majors so that professors can identify more with students studying their discipline. Besides these, Williams tends to focus her goals on more of a semester to semester basis, with the underlining values of fairness and equality remaining consistent.

“I’m always very practical,” Williams said. “I’m always thinking a year out…The direction that I’m heading at this point is…to really focus on creating an inclusive college community and as a historian to really create an inclusive environment for our history students.”