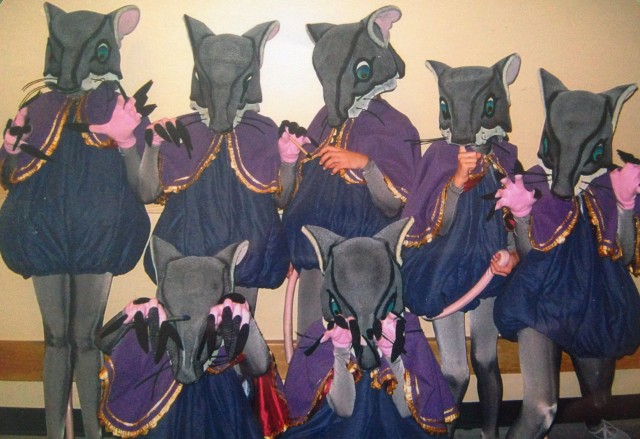 One of the strangest looks I have ever worn to school would definitely be when I attended middle school with my hair wrapped in curlers, covered by a hairnet to keep them in place. In order to have really large curls in our hair, most of the other girls at my ballet studio would do the same. We would go to school, then ballet class with our hair still wrapped up. Once class was over, we would head to the performance venue, where we would sit in a line and help each other take our curlers out and carefully make sure that each curl was still intact.

Spending countless hours on curling my hair is what I think of when I remember my childhood Christmas tradition of performing in the Grand Rapids Ballet’s presentation of “The Nutcracker.”

The original story was written by E.T.A. Hoffmann and set to music by Tchaikovsky. The show originally premiered at the Imperial Mariinsky Theatre the week before Christmas in 1892, in St. Petersburg, Russia.

“The Nutcracker” is a simple story of a young girl named Clara (in some versions Marie) who is given a Nutcracker doll from her godfather, Dr. Drosselmeyer, as a Christmas gift at a family holiday party. Once night falls, Clara sneaks back into her family room to find her Nutcracker, only to realize that she has been caught in a battle between the Nutcracker and the mice in her house.

The Nutcracker wins the battle, and Clara is taken to the Land of Sweets to see where he comes from, and there she meets characters from all over the world and the infamous Sugar Plum Fairy. At the end of the story, with the help of the Nutcracker and Dr. Drosselmeyer Clara is safely taken home, or awakens from her dream.

Even though “The Nutcracker” was not very popular at first, as the papers in St. Petersburg tore up the show’s debut, stating “The Nutcracker cannot pretend to be a ballet, but constitutes ‘spectacle’, which can be given with success on the summer stages of our small theaters. For our first-class ballet the production of such ‘spectacles’ is an insult,” it has still proven to be very popular with modern day audiences, as many still see the show every holiday season.

In 2004, at age 9, I auditioned for my first ever Nutcracker ballet. I had been dancing since the age of 3, and I had seen “The Nutcracker” several times over the years. The year before I auditioned, I had gone to the show to see one of my friends performing in it. Once the show got out, I could not stop thinking to myself ‘I want to do that next year. I want to be a part of such a wonderful production like that.’

I auditioned as an out-of-company student for the Grand Rapids Ballet Company’s production, and I received the part of a mouse the first year I was involved. I was completely thrilled to just be playing this small role, even if it was for a total of 10 minutes for each show.

And a lot of rehearsing goes into prepping for 10 minutes on stage. As an out-of-company student, it was quite intimidating for me to rehearse the first time with a studio full of other dancers around my age, who had been in the show before, or had at least danced at the GR Ballet for several years. I quickly got over that as we went into rehearsal.

The best part about rehearsing for the ballet was after about a month of rehearsal, we would start to put scenes together in the show. The mice would join the soldiers, the rats, and the Mouse King, Clara and the Nutcracker to put together the battle scene. Eventually we would add on the party scene at the beginning of the show, and the snow scene after the battle in order to put together all of act I. Later we would add the first few scenes of act II, until we were rehearsing the entire show all together as a company.

My first time being in “The Nutcracker” resulted in my continuous passion to want to study dance in my childhood. I ended up enrolling at the Grand Rapids Ballet for dance classes not long after dancing in my first “Nutcracker.”

The GR Ballet, along with many other dance companies, reuses the same choreography year after year for their version of “The Nutcracker.” While some small parts are revised each year, most of the show, from the choreography to the costumes, remains the same. Even today, a decade after the first time I was in the Nutcracker, I can listen to any part of the Nutcracker Suite by Tchaikovsky, and know exactly what is happening during the GR Ballet version that I performed in.

After years of dancing in a show I knew by heart, I was not surprised when I found out the company had chosen to completely remake the show this year.

When I went to the new show, the first thing that caught my attention were the drastic changes that were made in set design. The ballet had recruited Grand Rapids native and famed illustrator, Chris Van Allsburg, who also illustrated the Christmas book, “The Polar Express,” to design the sets of the new production with with Tony Award-winning designer Eugene Lee.

Many of the transitions from scene to scene looked a little more like watching a movie, rather than a typical scene change on a stage. From the lighting to the actual set pieces, the stage looked more magical than it ever had in the past.

Once the first scene of the show opened, I immediately realized that the GR Ballet had altered the plotline, too. In the past the first scene opened with Clara and her brother Fritz playing in their family living room while anticipating the arrival of guests for a Christmas party.

This “Nutcracker” opened with Dr. Drosselmeyer delivering the prologue for the show, which featured the toys that later come to life in the show. Many ballet companies change up the storyline of “The Nutcracker” like this. While this did add to some details later in the show, it also took away from the introduction of the main characters.

Going into the first few scenes I was caught with one big problematic question: Who is Clara?

Clara, the main character, typically played by a dancer between the ages of 14 to 16 at the GR Ballet, is usually easy to spot. She is the only character in a white dress in the party scene, and because of this it is easy to follow her on the stage through her reactions of events that happen in the show. In the new version of the show, Clara wears a blue dress, and very easily blends in with the crowd on the stage.

Later in the show, I found myself questioning the exact same thing, when Clara grows up.

While overall the remake of the show was good, and nothing the GR Ballet cut or added was terrible enough to make them switch the show back to the old version next year, one of the biggest overall changes I saw was the lack of roles for students at the company.

As a former student, I understand the “The Nutcracker” is a company-wide show. The entire school is impacted by rehearsals for several months in order to produce the show.

The younger students of the GR Ballet are always so excited when they get to play a new part in the show, or when they finally get to be involved. Not many students take a year off, or choose not to participate in “The Nutcracker.”

With the changes between the two shows, many of the roles that are created to be played by students have evolved into different roles, or have been cut back in my observations. Many female student roles that were typically danced en pointe, have been made into easier parts. One of the best parts as an audience member going to see “The Nutcracker,” is seeing these young girls who can really dance well en pointe, even though they are just 13 or 14 years old.

Being in “The Nutcracker” was a huge part of my childhood Christmas tradition. It was a show that I made many friends through, some of which are still studying dance today.

In many ways “The Nutcracker” appears to have been altered so more of the professional company members and trainees were given opportunities to play more roles. As result the students are left to play easier, shorter, and smaller parts than they ever had before.

Even though the Nutcracker is for the whole company, it is also supposed to give young dancers an opportunity to be involved more than normal in the company. The GR Ballet needs to work to preserve exciting opportunities for all the young dancers, as many are inspired to continue to study dance after their first experience in a ballet.