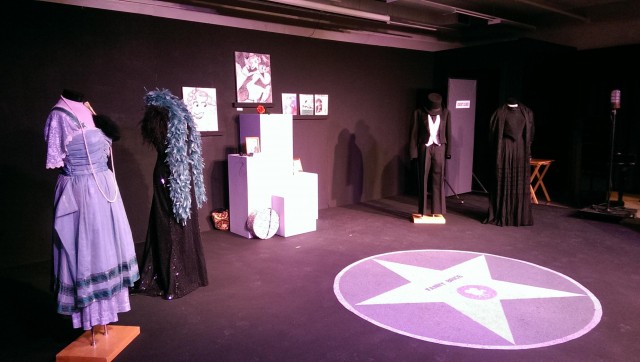 Jewish Theatre Grand Rapids’ premiere production of “One Night With Fanny Brice” began Wednesday and closed with a well deserved standing ovation by a crowd of just over 30 people in the Black Box of Spectrum Theater. Sarah LaCroix, 33, revived the spirit of Fania Borach, or Fanny Brice, through a one-woman musical showcase directed by Jean Reed Bahle, with musical direction by Alex Hamel.

Bahle, directing for the first time for JTGR, described her feelings of the night as “light, relieved, and celebratory.”

LaCroix stole the crowd with her essence of Fanny Brice’s sassy, feminine, and dramatic attitude in her own life as well as a musician and comedian.

The minimal set provided an easy performance space for LaCroix to engage the crowd closely.

“The audience really pushes and pulls with (LaCroix),” Hamel said. “She kind of comes alive in front of them.”

“I’ve got no future but, oh, what a past,” LaCroix sings for one of Fanny Brice’s musical numbers, reflecting the setting of the show which takes place in a museum where Brice comes alive and tells the audience about her life.

The production was cut down from two acts to one by removing some dialogue but still keeping all musical numbers.

“We ended up putting a lot of the dialogue inside the songs…making it more of a musical than it maybe was before,” Hamel said.

On top of LaCroix’s entertaining performance, the audience was able to learn about who Fanny Brice was and what her life was really like. Brice paved her way as a poor, Jewish girl who couldn’t help herself as a hopeless romantic living by her mother’s value that “real feelings must always be private.” Toward the end of the show Brice says that she can “read people so well except for the men in (her) life.”

LaCroix is a full time high school teacher at East Kentwood High School and a passionate actress in the Grand Rapids theater scene.

LaCroix was satisfied with the performance and the overall reaction.

“It’s so much more fun to [perform] with an audience in front of you,” LaCroix said, also making a point that you don’t have to be Jewish to participate in or enjoy Jewish theatre. “It’s a lot of non-Jewish people who just like the stuff that they do.”

LaCroix, Bahle, and Hamel are not Jewish.