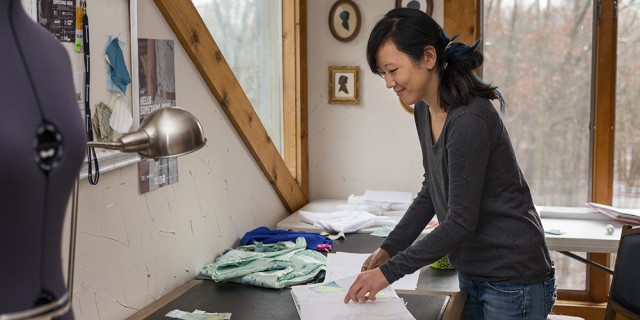 Although she wasn’t born into royalty, Jessica Swagman has proven she is more than capable of earning her crown. Swagman, 29, of Grand Rapids, has risen to the challenge of creating her own fashion line.

The Grand Rapids Community College grad is busy working on her third self-titled collection, she describes as, “a modern take on vintage glamour with a hint of edge and a strong, timeless and feminine aesthetic.”

Her inspiration comes from historical fashion, theatre, music and all forms of art.

Swagman said that because she is a vivid fashion lover it was challenging for her to choose one specific style that reflects the company.

During her time at Calvin College, Swagman found herself designing and sewing clothes on breaks between classes. She wanted to create and wear clothes that were different. Although mostly self-taught, her grandma taught her the basics of sewing. It wasn’t until she graduated with a bachelor’s of science degree that she began to think about designing clothes as a profession.

Swagman was born with half of her right arm, making it challenging for her to do certain tasks like sew or drape fabric over her dress form, but she found a way to adapt. She wears a prosthesis, and while watching her sew in her studio her disability is not obvious.

Swagman, who doesn’t often discuss her condition, said she accepted her physical limitations and ran towards her dream.

“I don’t want people to think, look at what amazing work she can do with one arm, but rather, look at her amazing work,” Swagman said.

In 2010, Swagman started working towards an associate degree in applied arts and sciences for fashion merchandising at GRCC. She was then able to begin planning for the official launch of her company in August 2011.

Swagman currently has two collections available and is working on her third for Spring 2015. Her Spring 2014 collection was inspired by Claude Monet and his paintings. Every square inch of the fabric was dyed or hand painted.

“For two weeks straight I was bent over on the ground painting the fabric,” Swagman said.

The Fall 2014 collection was inspired by the changing of the seasons and colors of nature.

Many designers say, “fashion is not at all glamorous,” and Swagman agrees. Half of her day is spent doing the logistics, like answering emails, researching trends and monitoring her website jessicaswagman.com. The other half is spent in her home studio designing.

As a GRCC graduate, Swagman describes how her collection could resonate with college students and some struggles they may have.

“My collection, like life, is not about fitting into a mold of who the world thinks you should be,” Swagman said. “Rather, it’s about embracing all of who you are, the things you love about yourself and the things you don’t. Always striving to be the best form of you.”

Swagman said she enjoyed her time at GRCC and appreciated the downtown campus, as there was so much inspiration for her fashion and interior classes. Her best advice for students is:

“Get as much out of the experience as possible and be open to learning in the most unexpected ways.”