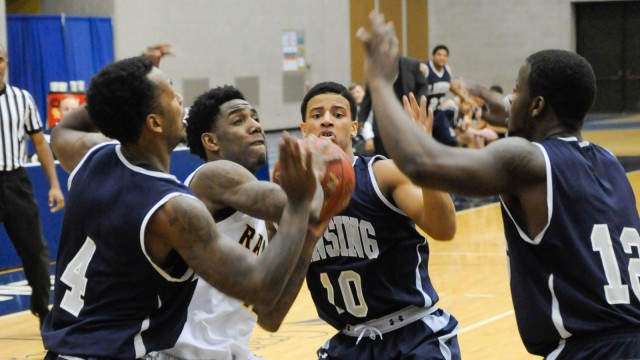 With GRCC leading by as many as 11 points in the game, LCC was able to take a 95-93 lead with under a minute to go. DeMarkus Stuckey made two free throws with 26.9 seconds left to tie the game.

LCC would slow up the play and go for the last shot when GRCC’s  Kevin Brower stole the ball and passed it down court to Stuckey, who was then  fouled with 7.3 seconds left. He made both shots to give the Raiders a final 97-95 lead. Lansing Tracy Edmond would miss a game tying shot as time expired.

“We should have won the game,” LCC coach Mike Ingram said, “I thought we were in a good possession there at the end”

Physical play dominated the game with a small scuffle breaking out between GRCC’s Cameron Burhannon and LCC’c Momadou Ba with 5:58 remaining. Ba was given a technical foul.  GRCC’s Michael Miller would sink both fouls shots.

“It was a barn burner,” GRCC coach David Salmon, “We have been rivals for years and no matter when, it is going to be an intense game.”