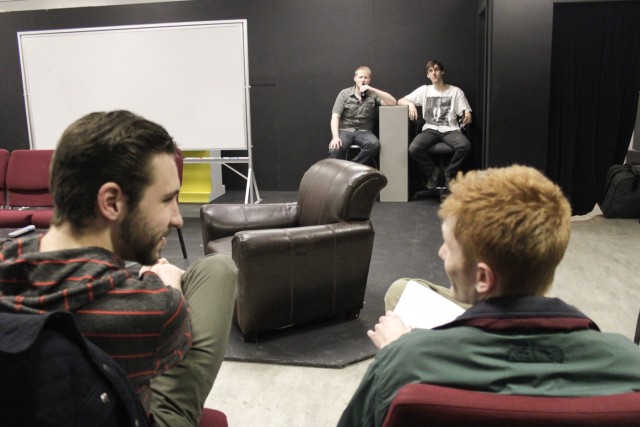 When Dennis Sullivan, a filmmaker, calls out his bully from high school during his Academy Award acceptance speech, he starts an anti-bullying campaign that quickly flies out of control. The GRCC Players will be telling his story in their production of “From White Plains,” Feb. 26 through 28.

The 90-minute drama follows the lives of four male characters, Greg (Myles Messinger-Platt), John (Kenny Judge), Dennis Sullivan (Robbie Ellis), and Ethan (Jerry Jones). It starts following the Academy Awards when Sullivan wins for his film based on his life’s experiences, and he reveals the real homophobic bully, Ethan, who picked on him in high school. The media blows up and forms a strain on Ethan and John’s friendship, and Dennis and Greg’s relationship.

Judge, 20, of Port Huron said his character is there as a main support system for the character Ethan when everyone in his life becomes alienated against him.

“John is Ethan’s best friend,” Judge said. “He is kind of the one that tries to help Ethan deal with what happened. He is trying to make Ethan come to terms with the fact that he was a bully, because he is just kind of avoiding it throughout (the story)…and it is just something he has to get over.”

Ellis, 21, of Grand Rapids said that his character, Dennis, is very passionate about the work that he does, but is sometimes insensitive to the situation unfolding around his character in the show.

“He is very connected to the past,” Ellis said. “That is what his movie is about…his passion comes out as anger, and…as a person who means well, but poisons certain relationships throughout the show (because of his movie).”

Jones, 27, of Newaygo said that his character is trying to deal with his past of being a bully, and overcoming what everyone in his life now thinks of him because of the situation. .

“Ethan is attempting to reconcile two parts of himself,” Jones said. “And just deal with the minutiae of life.”

Messinger-Platt, 18, of Rockford said his character goes through a lot in the show, but mostly in helping Dennis deal with the drama following the Academy Awards.

“He is Dennis’ boyfriend, and he has a dynamic (relationship) with his parents…as far as his sexuality goes,” Messinger-Platt said. “(That causes) a strain on Dennis in his relationship.”

The entire cast works together like an ensemble, however there is a specific spotlight on Ethan and Dennis’ story throughout the show.

“Everyone is going to find something in the show that they can relate to…that (they) can take away,” Ellis said.

The show is produced in collaboration with GRCC’s student organization, StandOut, a support group for LGBTQ individuals. Some of the proceeds from the show will go to the club.

“I have really enjoyed working on this production and with these students,” director Tom Kaechele said. “Theater is a wonderful avenue to deal with socially relevant issues, and this play does just that. I’m proud to be one small part of it.”

“From White Plains” runs 8 p.m. Feb. 26 through 28. It will be shown in the black box theater at Grand Rapids Community College’s Spectrum Theater. Tickets are $5 for students and seniors, and $10 for adults, and can be purchased by calling the Spectrum Theater Box Office at 616-234-3946.