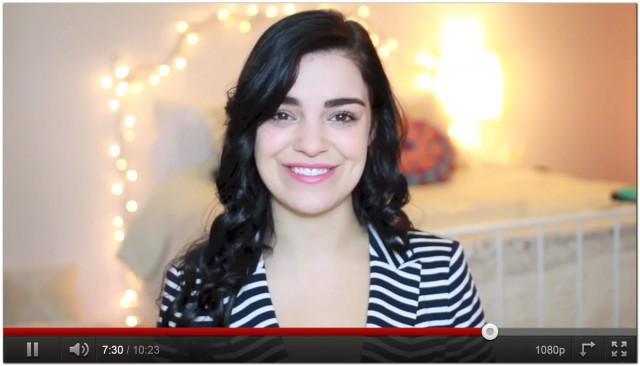 Adams, 20, from Holland Michigan, and in her second year at GRCC studying elementary education, has nearly 110,000 subscribers on her YouTube channel. Her videos have received more than 8 million total views and are about a number of topics that reflect her interests, hobbies and opinions.

“It’s basically just my life,” Adams said. “A lot of people stick with themes, and I did that for a long time. My channel name is makeupbykimm, so I really wanted to just do makeup… It’s transitioned from being more makeup oriented, to now, more fashion because that’s what I’m into, but mostly just lifestyle. I do some baking and cooking videos, I do DIY videos, and honestly those are some of my most viewed videos.”

Adams first discovered her knack for YouTubing when she was in middle school.

“I stumbled upon a YouTube video by make up Kandee Johnson,” Adams said. “She was the first one I ever saw and I showed her to one of my best friends at the time and I was like, ‘Oh my gosh, this girl is so cool.’ So we would watch her videos and I was like, ‘I could do that.’”

While Adams is a successful YouTuber now, with a dedicated fan base, she wasn’t an overnight success.

“Some people put up five videos and all of a sudden they have a ton of subscribers, especially depending on who you know and how well you’re being promoted,” Adams said. “I started those first videos in middle school, so people were starting to subscribe, and then I didn’t really do videos for a while.

“I wasn’t consistently putting anything up … So I wasn’t really super into it until probably my sophomore year of high school. I think I had more time to dedicate to it and more energy.”

When Adams began uploading more videos, her fan base started to grow.

“I feel like it’s been a steady process,” Adams said. “As I’ve gotten bigger I get more daily (views) now because, the more you have the more people are going to see it.”

Adams is now able to fully support herself financially through her YouTube channel.

“As of right now, YouTube is my full time job,” Adams said. “I pay for my own rent and I have for the past year … and I’m able to do that all through YouTube, which is really awesome for being a college student.”

Adams ends every video with the words of encouragement, “you are beautiful and loved.”

“My church ends just about every service by saying you are loved, and that always stuck out to me. That’s so nice and I really like that they say that, so it originated from there … I got a hand-painted sign from a viewer and it says, ‘You are beautiful and loved,’ on it and I have it up in my room.”

In January of 2011, Adams started a vlog (video blog) channel called lifewithkimm. Adams films bits and pieces of her day and uploads it toYouTube, giving viewers a glimpse into her daily life and allowing them to know more about her. The channel currently has over 13 thousand subscribers.

Because some of the videos are more personal, Adams’ life and relationship is often put on display. Her boyfriend Chris Huls even has a fan base of his own.

“People love my boyfriend! They love when he’s in videos. It’s so funny. There are fangirl accounts for my boyfriend. At first it was kind of creepy, but now I totally love it… People get really involved in the whole relationship. They’re like, ‘Oh, I haven’t seen Chris in a video in a while. Are you guys still together?’”

Huls, who Adams has been dating for four years, has gotten used to being in front of the camera.

“It definitely takes a lot of time out of her day which sometimes influences our spending time together,” Huls said. “But it also makes for fun moments. We have a lot of our relationship captured on camera, which is pretty unique.”

While making videos is mostly a fun experience, Adams deals with negativity that comes with the territory of having a YouTube channel. Commenters occasionally write hurtful things, but Adams doesn’t let that stop her from making videos.

“You’re never going to please everyone. You’re just not,” Adams said. “If you go into it with the mindset that you have to make everyone happy then you’re not going to be doing videos for very long, because there’s just no way.”

Huls also deals well with the reality of negative commenters on the Internet.

“When the comments are directed towards me, it doesn’t really phase me. I don’t always read them anyways,” Huls said. “When the comments are about Kim, it does make me upset if she’s affected by them. Usually she isn’t bothered… But there’s the occasional comment that she finds hurtful. I just try to be there for her.”

Adams held a meetup in October for her birthday, where she had the chance to meet and get to know some of her fans, including some fellow classmates.

“There were actually a couple girls from GRCC who I’d never met before who came, and later I found out they went to CC,” Adams said. “It’s such a small world … A lot of people brought gifts and cards, which I was not expecting at all, like I didn’t even think to say don’t bring anything. It was a decent turnout considering that it was in a smaller city.”

Adams advises anyone who wants to start a YouTube channel of their own to simply “stick with it.”

“Don’t be too upset if you’re not getting a lot of views right away, or (you get) some hate comments or thumbs down … That’s what’s going to keep you from growing your channel, and making videos. As long as you have a positive outlook on it and you’re determined to keep going, because it’s not one of those things that happens overnight.”

Adams plans on transferring to Grand Valley State University in the fall to continue studying elementary education. She says she plans on continuing to YouTube.

“I’m just kind of taking it day by day and doing what I like and if it’s well received, then even better.”

Adams previously has worked as a contributor to The Collegiate. Read here for her story on how to start a YouTube channel.