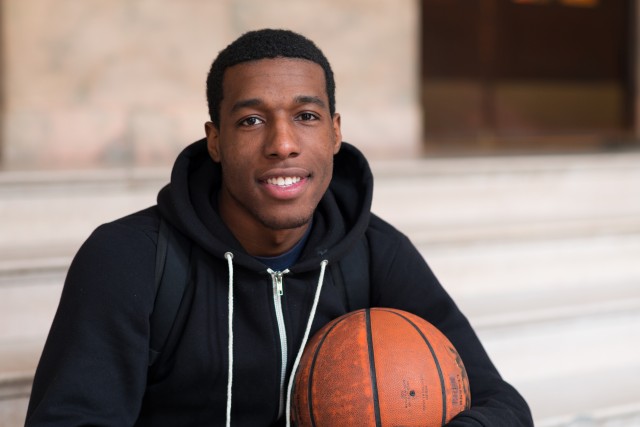 After growing up in the Cabrini-Green Housing Projects, on the north side of Chicago, Greg Fleming has found comfort in Grand Rapids, playing basketball for Grand Rapids Community College.

With the gang environment of drug dealing and violence, Cabrini-Green was one of the worst housing projects in the United States in the early 2000’s.

“A lot of people say that Grand Rapids is a small version of Chicago, but that is not true,” Fleming said. “Grand Rapids is a laid back city where you don’t have to walk down the street looking over your shoulder.”

The oldest of three boys, Fleming, who recently turned 20, was raised by a single mother, who took on the role of both caregiver and provider.

Fleming’s mom played a positive role in trying to keep Greg away from the negative people and environment that surrounded him. She got Greg into sports and made sure he was always doing something positive, not just hanging out in the hood.

“Mom always stressed school and kept me focusing on sports,” Fleming said. “She was always telling me to get my education. It will take you further than anything.”

Out of a group of 15 friends that hung out together in middle school, only Fleming and one other made it to college.

“Six or seven have died and most of the rest are incarcerated,” Fleming said.

At first Fleming did not take his education seriously and found himself getting into trouble in school for fighting and disrespecting teachers.

That changed with the help of a mentor, Deepak Deajva, who entered early in Fleming’s life.

Deajva is a college graduate from Texas A&M and showed Fleming what a successful life is. He also taught Fleming life skills and how to be successful in life.

Once Fleming got a taste of success, he knew it was something he wanted. The adversity of inner city families and an environment full of negativity was something Fleming had to get out of, with the options being school and basketball, or gang banging and selling drugs. Fleming didn’t want to live the lifestyle of the streets, so he stayed motivated and graduated from high school and let his play on the court take him to new heights.

Fleming’s girlfriend, a student at Grand Valley State University, on an academic scholarship, invited him to stay with her last summer.

It was then that Fleming reached out to former GRCC Basketball coach T.J. Carnegie who gave him a tryout and offered him a scholarship.

“Greg is a great kid who came to me last summer and asked for an opportunity to tryout,” Carnegie said. “He impressed me right away with how hard he played and how competitive he was.”

With a successful season of playing basketball for the Raiders behind him, Fleming has been offered scholarships to several four-year schools to continue both his education and play basketball.

Controlling his own destiny, Fleming would like to play basketball overseas and then end up working in the medical field.

“Anything is possible, but my degree is a must,” Fleming said. “Even if it takes me 10 years, I am going to get it.”