As a columnist at Rolling Stone, for the past 10 years, Matt Taibbi has written attention-getting stories on various topics, ranging from finance, to sports and to politics.

In articles like “For David Brooks, the Rich Are People, the Poor Are Numbers,” Taibbi’s style of straight to the point writing shines, as it does through his articles over the years. His ability to deliver the facts and voice his opinion laid the foundation of a great career, and now an insightful novel. 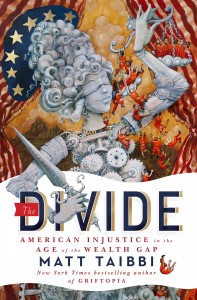 Divide: American injustice in the Age of the Wealth Gap. Taibbi challenges readers to think about why their rights are determined based on wealth or poverty. Why have the crime percentages decreased, yet the prison population increases? It just doesn’t make any sense, and that’s the exact concept that Taibbi points out.

Chapter after chapter, readers get the opportunity to question the very system that the country runs on, and why it seems to be different because of the money building up in American’s bank accounts or the lack there of. Taibbi referred back to articles, and stories he’s seen that build the foundation to the exact thing he is questioning, the law.

Taibbi will bring his message to Grand Rapids Community College March 25 when he addresses an audience for the fourth and final segment of the Diversity Lecture of the academic year at 7 p.m. at Fountain Street Church. A question and answer segment will follow the lecture.