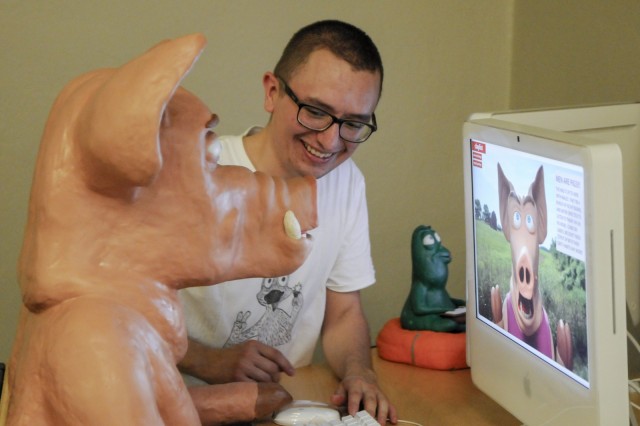 A few critters are looking to meet new friends, and maybe more, at one installation this ArtPrize, starting Wednesday.

A 120-pound life-size clay pig in underpants casually scrolling through personal ads sits next to two other hopeful creatures in one corner of DeVos Place. “claylist” is a multimedia send-up of Craigslist personals and other dating app profiles featuring anthropomorphized clay sculptures of animals.

With “claylist,” former photo editor of The Collegiate Jonathan D. Lopez unequivocally proves he’s not just a photographer. Except for the computers sitting on the desk and the headphones, he has created everything the audience sees and hears from scratch.

Lopez, 25, sculpted two dozen animals, took pictures of them in familiar habitats, wrote personal ads for them, created a video presentation of those ads including narration, built the desk and chair and programmed the computers to run the video on a loop.

The kernel of the idea started in high school when one of his Rogers High School classmates brought up the missed connection and personals sections of Craigslist.

“I never heard of it before then and once they showed me that, I realized there was a subculture of people dating and meeting people on Craigslist,” Lopez said. “You’re either so shocked that you turn it off immediately or you’re so shocked you can’t stop looking at it.”

According to Lopez, “claylist” holds a mirror up to the segment of society that uses personal ads and dating apps to find love.

“You don’t get so many average joes on Tinder or Craigslist, you get a lot of party animals,” Lopez said. “When compared to animals, the behavior is totally acceptable.”

Don’t get him wrong, it’s all in good fun though.

“It’s definitely more just a parody of human interaction on personal websites,” Lopez said. “It’s not a barometer of the overall atmosphere.”

The project really took shape when Lopez travelled to New York City with The Collegiate for a journalism convention last March. One of the speakers had written a book on love and relationships and Lopez began putting the pieces together in his mind.

“It just kind of clicked right there,” Lopez said.

Lopez started working on “claylist” in April and put the finishing touches on it last week during installation when he had to touch up one of the pig’s ears. Despite working morning shifts which start around dawn at a local coffee establishment, he made an effort to work on his art.

“It was a daily process of sculpting,” Lopez said.

A fan of clean humor and leaving things to the imagination, Lopez wanted to create art that would be accessible to young people, but not alienate adults.

“The pictures are engaging for kids, and that’s about as deep as a lot of the kids will go,” Lopez said. “The stories are entertaining for adults and teenagers. Each person brings their own optics to the piece because your own personal experiences … make it that much more entertaining.”

His love of surrealism and clean humor goes way back. Lopez’s mother would bring home “Wallace and Gromit” and “Mr. Bean” for him to watch as a child.

“I had a lot of British humor impacting my early childhood,” Lopez said. “It’s tongue-in-cheek with a lot of things. I’m a really big fan of Looney Tunes. Watching that as an adult, it’s just like, ‘man, I didn’t realize what they were saying there.’ But there’s something for everyone.”

“claylist” contains 28 sculptures, approximately 300 pounds of clay and took nearly 1,000 hours to sculpt, photograph and produce. For all this effort, Lopez has been able to speed up his sculpting process.

“Doing it daily enabled me to really discipline myself and figure out ways to do things faster,” Lopez said. “I’m actually shocked that when I look back at the time I spent on each character. Towards the end, I was spending only four or six hours on a fairly nice character that would have taken me close to 10 hours at the beginning of the project.”

In addition to the live installation, Lopez is releasing his photos to social media daily throughout ArtPrize and has an e-book of the personals available for purchase on his website. He will not be releasing the full video loop with the voices anywhere else.

“I want people to have a reason to come down to ArtPrize,” Lopez said.

ArtPrize is a two-week-long public art competition featuring more than 1,500 entries throughout Grand Rapids, and awards $500,000 in prizes based on public voting and a jury of art professionals.