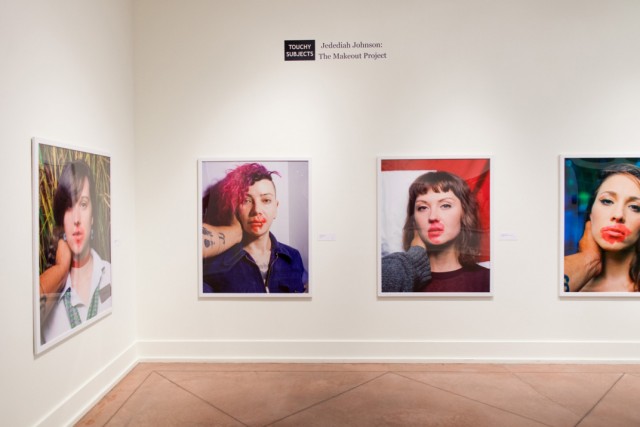 One ArtPrize artist is hoping he can kiss his way to the grand prize by bringing photographs of messy kisses to the Fifth Third Bank venue.

In “The Makeout Project,” artist Jedediah Johnson, 36, puts on a liberal amount of Cover Girl’s Hot Passion lipstick and makes out with both male and female volunteers, smears their faces with the red lipstick then photographs their reactions.

Johnson, who lives in Indianapolis, is “mildly internet famous internationally” for his project which began, in part, to overcome his social awkwardness.

“What inspired me to do (this) was a lifelong fear of kissing people,” Johnson said. “Because we’re all a little awkward in romantic situations, and I was maybe a little more so than some people.”

Skeptics should be assured that Johnson’s motives are pure.

“Kissing somebody for an art project is a completely different thing than kissing them because you like-like them,” Johnson said.

After a few false starts and critiques at the School of Art Institute of Chicago where he went to grad school, Johnson stumbled upon the winning formula.

“I started putting on the lipstick and going to parties and kissing people at parties and taking pictures of them there,” Johnson said.

Once the project got going and he had something to show people, it was easier to recruit volunteers at scheduled times.

“I only make out with people by appointment now,” Johnson joked.

During his appointments, he gets everything set up and puts on his lipstick. Before he starts making out, he asks his subject if they’re ready. Invariably, they are. This intrigued Johnson because, early on in the project, their readiness triggered his fear of kissing people.

“Every time, I would be scared and the other person would just be standing there ready to do it,” Johnson said. “And I always felt like, ‘Why am I the awkward one? Why am I more awkward than every human being on the planet?’”

One day last year on his big Midwestern Makeout Tour, Johnson decided to flip the script and have his subject kiss him. Surprisingly, she had the same reaction he normally did.

From then on, he has always been the initiator of the kiss. He was relieved that he “wasn’t just overly awkward personally,” but was just reacting normally.

His first appointment makeout was with a woman named Karin, who he met at a bar in Indianapolis prior to grad school who just happened to share his birthday. Once he began grad school, they stayed in touch through Facebook. One day he surprised her.

“I said, ‘Here’s some other stuff I’ve been doing with kissing,’” Johnson told her. “‘Here’s some 8×10 portraits that I did that are pretty cool. Do you want to do this thing where you kiss me and I take an 8×10 portrait of it?”

On the rare occasion Johnson approaches people now, there is much more proof of his legitimacy. More often, he’s the one being solicited. He accepts adult volunteers regardless of gender, but he also occasionally kisses babies which has stirred up controversy, especially online.

“A lot of these are with properly aged adults, and some of them get more sexual,” Johnson said. “But part of the whole thing of this project is that there are different kinds of kisses.”

Johnson assures critics that there’s no funny business going on.

“I kiss babies like everybody kisses babies,” he said.

From the photographs, it’s pretty obvious to most people that the baby kisses are different than the kisses with adults. They are a single kiss like any parent or politician would give to a baby. That still doesn’t appease his online critics, but Johnson is philosophical about the whole situation.

Johnson says some people perceive his art as sexually aggressive because he is holding their neck to provide a connection between him and the audience. There is also concern that some of the subjects aren’t willing participants.

“If I ask somebody if they want to kiss me and they say no, I just stop,” Johnson said. “I don’t try to convince anybody.”

Johnson’s parents, his mother in particular, are often confused and even disapproving of his work, but that doesn’t dissuade him.

“A good rule of thumb for artists is if your mom likes it immediately it probably isn’t worth making.”

Has “The Makeout Project” cured Johnson’s fear of kissing and his social awkwardness?