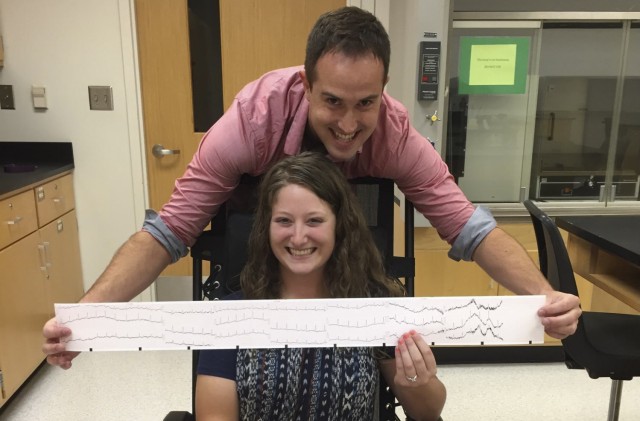 When Brad Moore met Kari Schuitema three years ago, in a science lab at Grand Rapids Community College, there was immediate chemistry.

Back in 2012, Moore and Schuitema found themselves as partners for an EKG testing lab.

“I had her hooked up and I made fun of her woolly socks that she had on that day,” Moore said, describing their first lab experience. “When I made fun of her socks, her heart started racing. Now, it’s sort of an inside joke and we actually still have that paper from 2012. So that’s why I wanted to go back and renew that, because it was a nice moment from the beginning of our relationship.”

Schuitema laughed at the thought of that day, back in 2012.

“Yeah, the woolly socks. I love that he tells everyone that story,” Schuitema said. “It was the middle of the winter, and he thought it was hilarious that I was wearing woolly socks.”

After dating for a few years, Moore, 31, recently decided he would show Schuitema his love with an elaborate proposal that involved bringing her back to the room where they first met. Moore and Schuitema met in January 2012 in an Anatomy and Physiology lab at GRCC. They were assigned as lab partners in the course taught by Assistant Professor Kate Kryger.

By October, the relationship transitioned from friendship to courtship.

“I remember I was having a bad day and he gave me the note card,” said Schuitema, about the first card she received. “I figured he was just trying to cheer me up, but he told me that for the next 365 days he would tell me why he loved me, and a different reason every day, so I was excited. I thought that was really cool and very like Brad. He’s very thoughtful.”

Moore aimed to keep Schuitema in the loop. He said, “she doesn’t like surprises.” So the note cards were intended to be subtle hints.

Schuitema had a notion about what Moore was planning, remembering that they’d previously talked about marriage.

The note cards were only the beginning. Moore wanted to make a memorable evening, so he headed back to GRCC where they met and recruited their former professor to help out.

Kryger agreed to help and went up the chain of command at GRCC to use some echocardiogram equipment and the classroom to surprise Schuitema.

“Brad was the one with the plan,” Kryger said. “I just helped orchestrate it. Brad came to me months in advance. We had to receive the necessary permissions to use the EKG machine. It took a little bit of time, but it came together.”

Moore and Kryger met several times to plan a run through with the machine, ironing out the details on how to get Schuitema to play along. The two came up with a plan to pretend that something was wrong with the machines.

“Kate Kryger came up with all the diabolical things about pretending she was having problems with the machine,” Moore said.

Months in advance, Schuitema knew something was up.

“He told me months before that he wanted to take me on a date that night,” Schuitema said. “We both worked, so I told him that I’d rather do a date on a Friday or Saturday so we can enjoy ourselves, but he said that it had to be on that day, and that we would go out for a nice dinner.”

On Aug. 24, Moore picked Schuitema up from work. He brought her to Crescent Park to distract her. When the weather changed quickly, he offered the shelter of GRCC’s Science building.

But the park scene seemed a little strange to Schuitema.

“I didn’t know why we were there,” she said. “He told me we were going to dinner, and I was hungry, so I was kind of frustrated that we stopped.”

Moore wasn’t sure how to get Schuitema upstairs, but she unknowingly helped him out.

Looking back now, Schuitema is amused by how easily she was fooled.

“We walked down the hall, and saw Kate Kryger’s desk was covered in EKG materials,” Moore said. “Kate had an amazing cover story like she was in the building because she was trying to get the machine to work. She needed some help. So Kari actually volunteered herself to sit in the chair and get an EKG, which worked out perfectly.”

Moore hoped that Schuitema wouldn’t connect the dots and figure out why they were back in the classroom.

“We walked into the room, I hooked her up to the machine and the machine actually wasn’t working,” Moore explained. “That’s why Kari believed that this wasn’t a setup.”

Moore had  even poked fun at Schuitema, reminding her of the woolly socks she had worn the first time they did the EKG lab.

The only clue Schuitema picked up on was the way Moore strategically placed the leads on her. He knew right where to put them and after so long, this seemed strange to Schuitema.

“I was thinking something was going on, because he knew exactly where to hook me up and I thought that was weird because we hadn’t done the EKG machine in years, but then the machine wasn’t working, so I thought that we were really there just helping her with the machine.”

As soon as the machine began working, Moore got down on his knees in front of her and asked, “Will you marry me?.”

It was at this point that Schuitema’s heart began racing again, just as it did in 2012, showing that love can be seen in an EKG reading.

After the proposal, they printed out yet another reading of Schuitema’s affection for Moore, giving them two valuable memories to keep.

Schuitema and Moore plan on marrying in June. Kryger, of course, is invited and happy to have been part of something that came out of her own classroom.

“They are both wonderful people and they are a wonderful couple,” Kryger said. “I’m just humbled and happy to be a part of such a magical moment in their relationship. Quite honestly, I haven’t been able to stop smiling since it happened.”