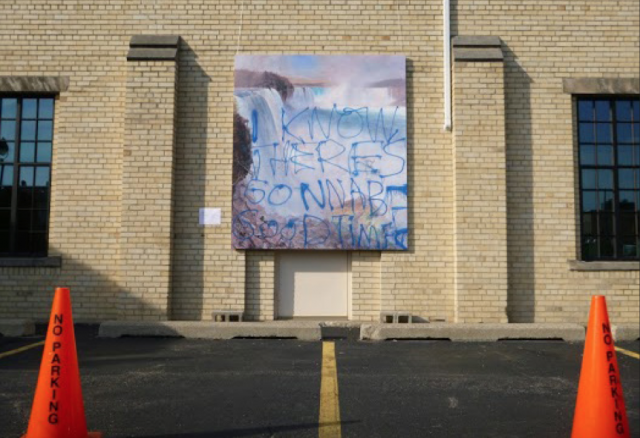 Wege was born in Grand Rapids, but currently lives and owns a studio in New York City. Her art primarily focuses on nature.

Her entry “Fragile Environments” is composed of two oil landscapes that model Frederic E. Church’s “Niagara Falls from the American Side.” Both of her paintings are mounted at First (Park) Congregational church.

The paintings contrast the Hudson River School and Graffiti styles of art to convey a metaphor for the destruction of the environment. The indoor painting has three vandalized cliffs, placed in the areas affected by the Public Access and Lands Improvement Act. The outdoor painting is defaced with spray paint.

“Most would not think it’s okay to have a painting like that outside on a wall, but they don’t give much thought to destroying the environments behind the work,” Wege said.

Her work on the entry started shortly after Obama’s second run for office, as an effort to combat the opposition of some republicans to regulations of the Environmental Protection Agency.

“I was frantic to reach out to these people and try to change their mind.” Wege said.

She also aims to reach out to an evangelical audience, stating that they “need to be voting with the environment, this is god’s beautiful creation.”