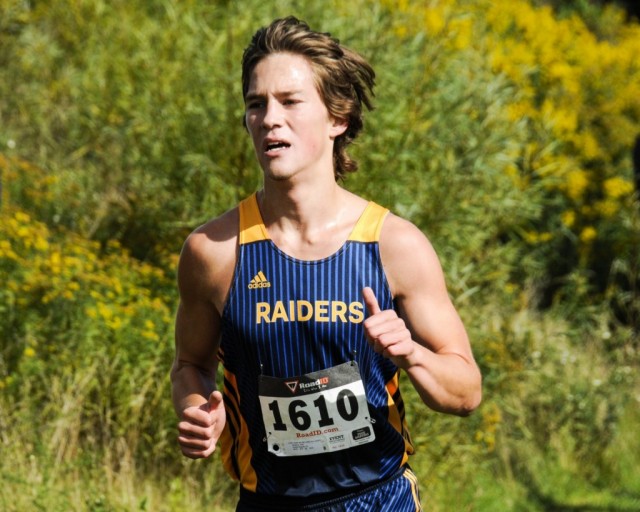 Freshman cross country runner Kirk Dickson is not afraid to push the limits of his training on a daily basis.

“Cross country is one of the most physically and mentally demanding sports out there,” Coach Matt Sicilia said. “To be on a team like this you have to be willing to push your physical and mental limits and also commit to a team-before-self culture.”

While still in a building process, the Grand Rapids Community College cross country team has been making great strides as a competitive, up-and-coming West Michigan running program. The men’s team has a very solid freshman class with Kirk Dickson, Isaiah Fox and Carter VerSluys, and there are a lot of people watching to see the Raiders progress into a championship-caliber program.

Coming from a state championship program at Rockford, freshman Kirk Dickson adds a measure of dedication and determination to the skilled young team of runners here at GRCC. With four years of cross country,  beginning as a highschool sophomore, it comes as no surprise that Dickson has progressed greatly as a runner.

Training for the Raiders usually consists of running anywhere from four to 12 miles daily, workouts in the pool, and sessions on the stationary bike. An example of an average day training for these athletes includes running a mile loop five times, at a pace of 5:15 per mile with only two minutes rest between laps. Dickson runs approximately 45-50 miles each week, and that’s on top of adjusting to life as a full-time college student.

“It’s not easy,” Dickson said. “I’m taking a lot of classes so that’s pretty rough. I’m just getting the hang of it.”

Despite having to make adjustments, it’s clear that Dickson is up to the challenge. Earlier this month, the Raiders placed a mere 11 points behind NJCAA top-20 ranked Muskegon CC, and Dickson set a personal best in the 8K event with a time of 28:25. He won’t stop there though, and hopes to set that time even lower in the near future.

“My goal is to get at least under 28 (minutes),” Dickson said. “I’d love to chop off another minute if I can.”

With two key meets coming up at Lansing CC on Oct. 9, and Muskegon CC on Oct. 16, he will soon get the chance to break that 28-minute mark and the Raiders will have the opportunity to showcase their young talent.

Sicilia is excited with the direction the program is moving, and is eager to see what the next few seasons hold for the running Raiders.

“The goal over the next two years is to add more runners, continue to build the culture, and make it to nationals as a team and finish in the top 10,” Sicilia said.

While these goals may seem ambitious, the Raiders, led by a staff of three high-level coaches, appear to be on track for great things.