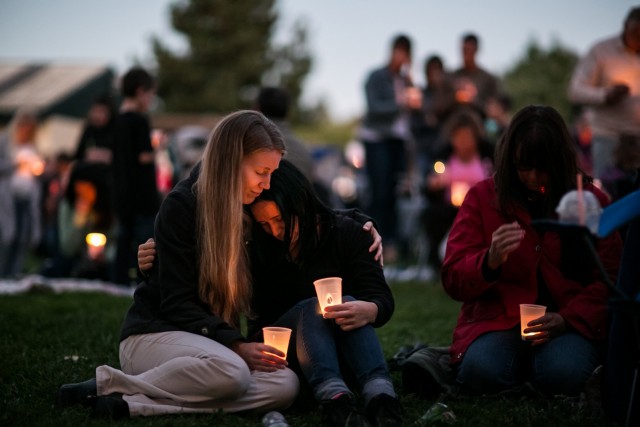 I do not feel safe at GRCC.

When interviewed after the tragedy, GRCC Police Lieutenant Jeffrey Hertel said the school is using the “Run, Hide, Fight” directive, a training required only of the college’s staff.

“I don’t think there is any way you can stop somebody from coming onto campus and doing this, but you can put things in place,” Hertel said, when interviewed after the shooting in Oregon. “It is everybody’s responsibility to ensure the safety of this campus … Part of the responsibility lies with everybody that uses this campus.”

With the current directive in place, responsibility is put in the hands of the professor to determine the fate of a classroom full of students.

As for students, Hertel is not aware of any discussion about further training. However, he said if enough student feedback is there, they may offer some kind of training. As of now, there are no solid plans to gather the student feedback.

“The training is directed at the instructor, or a building manager would be expected to kind of take the lead on that,” Hertel said in an interview after the shooting. “It’s online if somebody wanted that training.”

Right now, there is no concrete plan for students and staff to respond to an active shooter on campus.

Beginning this semester, the school implemented mandatory sexual assault training to students, that had to be completed before classes started, but no active shooter training. There is more of a chance of a fatality in a shooter situation, and GRCC should be making this its top priority.

Especially at a community college, many are very busy with outside responsibilities and it’s not fair to put pressure on individuals to determine their own safety. It’s more fair to give everyone a better chance of survival.

We are not the police. We are not armed and most of us are not officially trained to combat a shooter. We can’t be expected to either.

This year alone, there have been 45 U.S. school shootings. Naturally, it’s disturbing as a student reporter to hear that the only advice from campus police is to look up a video online.

No one can predict how an event like this could unfold and the police cannot save everyone.

If school administrators are not concerned with making a greater effort to try and educate and protect students and staff, students need to step up and push for the necessary change.

These shootings keep happening and the lives lost matter.

It shouldn’t take something like this happening on campus for us to recognize the need to be prepared.

At some point, the GRCC community – students and staff – need to say that what is now set in place is not enough. We need to be as prepared as possible and not left to wonder if a procedure students are not trained in will actually work.

The implementation would not be difficult. The school could hold more drills for practice, and without worry because high schools are practicing these drills already. The campus police could attend new student orientation and present to students ways of reacting. Students could take an online video-based quiz – like the one already used for the sexual assault training – before signing up for classes each semester.

Not just the campus police, but the whole campus community needs to start a dialogue about the reality of shootings in today’s day and age. Unfortunately, we’ve reached a point as a country when shootings in public places are not uncommon, so the conversation is not surprising. It just needs to happen.

As citizens, we can all agree on a common response – our lives matter and we need to be responsible for them and others. And not just amid gunfire, but working to prevent these situations from happening in the first place.

The counseling center at GRCC is equipped with free counselors ready to help with more than just an academic schedule. Here, the mental health discussion can be elevated. From this point on campus, students can learn the signs of unusual behavior and how to get people help who may not know they need it.

At a community college, people come and go without making lasting connections, so it’s not easy to keep everyone fully engaged. The chances of a shooting are not just elevated on school property, but anywhere from movie theatres, to church parking lots. We need to do more.