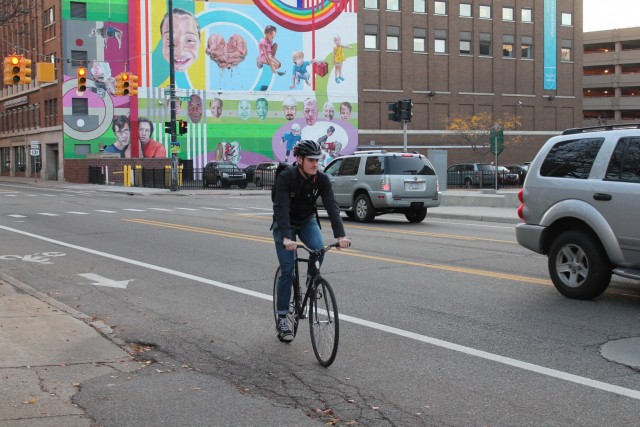 In an effort to save time and money, an increasing number of college students are riding their bicycles to school.

All over Grand Rapids Community College, bike racks are filled on a daily basis. Biking as transportation is growing and a few students had some input about their own biking experience and opinions for other riders around the campus.

Matthew Vailliencourt, 23, from Novi, MI, is in his second year at GRCC. He rides his single-speed Schwinn Traveler to campus everyday, because he lives only a mile and a half away.

Vailliencourt said he enjoys not having to pay or wait for parking. While he enjoys the perks of riding a bike, he doesn’t enjoy the risk of riding on the road alongside reckless drivers and the weather. He said he only rides from the spring until it snows in the fall.

Even though Vailliencourt enjoys the close proximity of stationing his bike right on campus, he still feels unsettled with the situation. He recommends the bike racks on main campus off Fountain Street.

Once he’s done at GRCC, Vailliencourt plans to return to Vanderbilt University in Nashville, Tennessee to pursue an accounting degree.

Jacob Burtt, 19, from Grand Rapids is in his second year at GRCC. He cruises on an fixed gear EighthInch Scrambler from his house, a mile down Fulton Street, to the college on a daily basis. Each day, he packs and wears an extra sweatshirt, gloves, lock and a helmet. Burtt rides all year long on his street bike, switching his tires to thicker mountain bike tires in the winter for a safer and easier ride.

Burtt sees riding as greater than a hobby. He competes in races, local bike trails, delivers sandwiches for Jimmy John’s and fixes bikes in his spare time. He recommends to new and old street riders a cruise on The White Pine Trail. And for mountain bikers, a ride through, Cannonsburg, in Belmont, and Merrell, in Rockford.

Every passion comes with pros and cons. Burtt enjoys riding because it keeps him in great shape all year round without hitting the gym.

“As a college student and having recently moved out, I needed to cut back on funds and biking helped out,” Burtt said. “Anything within five miles I’ll bike.”

Burtt’s only downside to biking is the everyday uphill ride home, up Fountain Street and Fulton Street.

For new riders who are debating biking to and from school, Burtt describes it as a fun, cleaner and healthier alternative.

“Sport a helmet on every ride because everyone trusts themselves, but it’s really for the people driving recklessly by texting, drinking and being occupied with something else,” Burtt said. “Watch out for yourself because not everyone else will.”