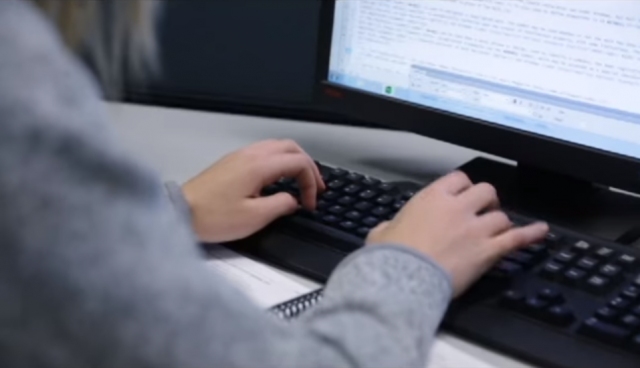 By teaming up with the International Electronic Commerce Consultants, also known as the EC-Council, Grand Rapids Community College is the first accredited training facility in Michigan to teach an Ethical Hacking course.

The class of 13 convenes once a week for three hours in the Applied Technology Center where the students simulate hands-on defense techniques that can be used in the real world of hacking. Andrew Rozema, instructor of the Ethical Hacking program, described the class as using techniques, that are frequently used for malicious intent, for a more honorable purpose.

The Ethical hacking program is a two-part course that can be completed in two semesters. Upon completion, students are able to take the EC-Council’s Certified Ethical Hacker exam. Certified students are then prepared to obtain “red team” positions such as a security analyst, penetration testers, or information security managers.

Rozema explained that hackers are interested in obtaining a number of different things, personal information such as bank account numbers, home address, and passwords are often a sought after target.

Students not only train to keep hackers out of computer systems, but also to recognize social engineering security holes where people can be tricked out of their passwords and other personal information.

”When the target is the computer, the people are sometimes the weakest link,” Rozema said.

An example of this can be seen on the social network site, Facebook. Occasionally someone may send a link via Facebook messenger or through a status update which might look “fishy” or off. Usually there is a link with an attention grabbing headline encouraging people to click or share the unbeknownst virus. Although the computer itself may know to not open malicious ware humans do not have the same built in protection.

When explaining how hacking works, Rozema said that even the best in the business can be hacked and describes it as “the name of the game.”

Rozema is hoping to offer the ethical hacking program during the 2016 summer semester as an accelerated online course, if the program is not offered than students next chance to take the first part of the class will be in the fall of 2016.