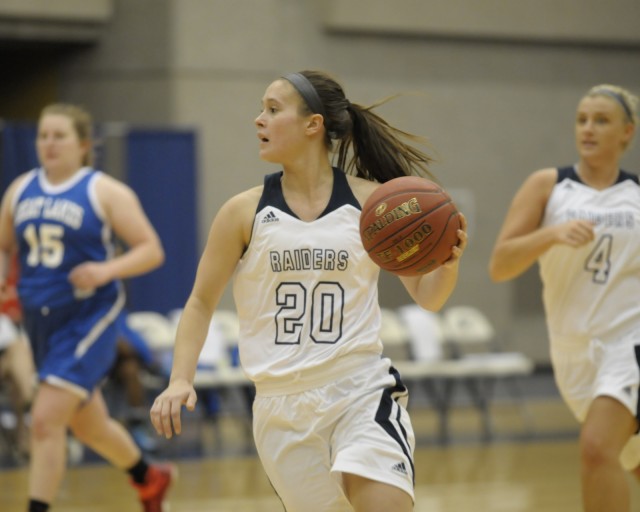 The Grand Rapids Community College women’s basketball team bounced back in blowout fashion against the Great Lakes Crusaders with a 109-19 victory on Thursday.

The Raiders never had to look back as the game was not much of a challenge to them. Brittany Bowen lead the team in scoring with 23 points. She said her team’s effort was excellent and she sees more good outcomes in the future.

“I think we got a lot of our points just from running the floor,” Bowen said. “I believe that we are going to do really well, and continue that into the postseason.”

Bowen was not the only player on the team to reach double figures, with five other teammates joining her. Deanna Rodgers had her first triple double, recording 16 points, 11 assists, and 10 steals. Ciara Sundermann had 20 points, Karlee Karpowicz finished with 12 points, Courtney Zenner had 13 points and rounding out the list was Regan Cross with 11.

GRCC women’s basketball coach Ray Kimball was happy with the effort, despite the lack of competition.

“We did what we were supposed to do against a team that wasn’t as good as us,” Kimball said. “They did a great job of staying within themselves and finishing the game all the way to the end.”

Kimball was happy with how the game went and is ready for the upcoming games on the schedule.

“I’m just happy we got out of this game injury free, because it’s the only thing that could have went wrong for us playing against competition that didn’t really keep up,” Kimball said. “We’re gonna take a day off, come back on Saturday, and then we got two big road games with Davenport and Mid Michigan on the road to be ready for.”