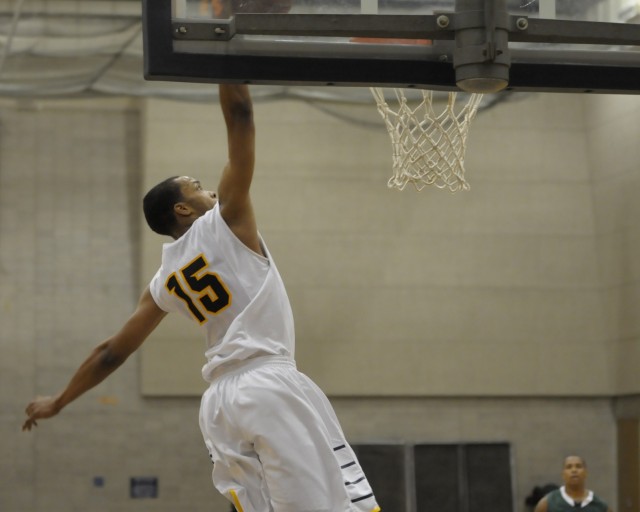 The Grand Rapids Community College men’s basketball team was facing the start of the season with three-straight home losses. Thanks to great play down the stretch, GRCC was able to escape the Oakland Community College Raiders with a 97-92 victory.

The game was highly intense throughout with multiple lead changes. Multiple players hit big shots and made good plays late in the game, but none were bigger than Myles Ervin’s layup and steal off the inbound for an assist to give GRCC the lead.

“Today we played a lot better than we did the first few games because we shared the ball more and played better defense,” Ervin said. “We came out knowing we had something to prove, we’ve been having hard practices all week making sure we didn’t go 0-3 on our home court.”

Ervin was at the line late in the game where he knocked down 3 of 4 free throws to put away the game. His thoughts were simply to make make the shots to take pressure off his team.

“I gotta knock these down so my team can win and I can put it away,” Ervin said. “Less work we have to put in on defense if I can make it a five-point game rather than a three-point game and then we can just relax a little more.”

Spicer was happy with his team’s overall effort and play down the stretch.

“I was very pleased with the effort throughout the game other than the start of the second half,” Spicer said. “We shot the ball very well and that proved to be the difference from the first few games.

“It’s big when you have guys like Mike and Myles who can put the ball in the hole.”

Moving forward Spicer’s hoping his team can keep up the good shooting and continue to get better.

“We can build off of a game like this with confidence that we can shoot the ball like that night in and night out,” Spicer said. “We just need to get better day by day, even with no postseason play.”

The coach of the OCC men’s team, and former Michigan Wolverine guard, Antonie Joubert was not pleased with some of his team’s efforts down the stretch.

“We had too many turnovers, and not enough rebounds,” Joubert said. “We are just a young team, Grand Rapids has a good team and will get better.”