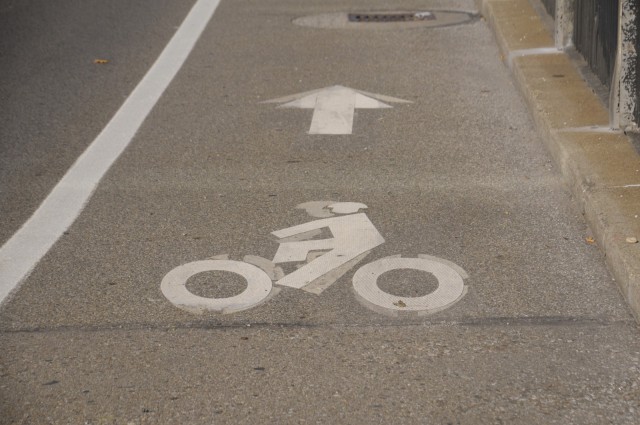 For cyclers, safety is a concern.

For those who travel by bicycle, or those seriously considering the option, road safety is a major concern.

In the US, approximately 33,000 people die annually in car crashes. Of those, around one in 41 is a bicyclist, according to the Michigan Department of Transportation. The addition of bike lanes to Grand Rapids’ infrastructure is an effort to improve road safety and make room for increasing bike traffic by creating a separation between bikes and cars.

According to Chris Zull, Grand Rapids City Traffic Safety Manager, 77 miles of bike lanes were added to Grand Rapids’ infrastructure between 2010 and 2015.

“I’d like to credit it to the Greater Grand Rapids Bike Coalition in conjunction with local political leadership,” Zull said regarding the road changes.

Zull said there are no future capital initiatives planned because bike lanes are considered part of the infrastructure and the cost of future lanes, including a concept plan for a total of 180 miles of bike lanes, will simply be “rolled into the cost of grants.” Zull explained that motor vehicle driver concerns mainly involve the safety of the cyclists. They are concerned about the unpredictable behavior of cyclists and frustrated by the traffic slowdowns bicycles cause.

Between 2011 and 2014, the number of bicyclists in Grand Rapids rose nearly 60 percent (according to statistics collected by members of the Greater Grand Rapids Bicycle Coalition bikegrandrapids.org). Statewide, cyclists add over $650 million annually to the economy from the purchase of bicycles and associated tourism dollars to savings in health care costs (MDOT).

Without looking at statistics, though, changes in our surroundings are a clear indication that ridership is up. This trend is expected to continue as more people choose to enjoy the obvious health and cost benefits of commuting to work and school on two wheels rather than four.

Joining the ranks of local commuters who travel by bike is fairly easy. Here is a list of things you need to know to be safe on the road:

Bike Lanes – Familiarize yourself with these lanes dedicated to bike traffic. They are marked and on the right side of the road.

Where to Park – Parking is convenient with literally hundreds of bike racks around the city. Ample on-campus parking can be found on Dr. Juan R Olivarez Student Plaza and in front of the library.

Support Services – Spin-off services are emerging as the local bicycle infrastructure grows. Bike repairs stands and lockers can be found near Rosa Parks Circle, Founders Brewing Company, and on Seward Ave near Lake Michigan Dr. The stands are equipped with tools and air pumps, useful for quick fixes. Additional instructions for use are available and can be scanned by your smartphone.

Bike Sharing is available using Spokefly, an app operated by The Spoke Folks, a non-profit, community-run, bicycle organization located at 221 Logan St SW. Using the app, customers can locate, unlock, and pay to rent a bike for up to a day.

Be a Defensive Cyclist – Ride as if everyone is going to kill you. Assume motorists cannot see you or will not get out of your way.

Cycling law- There is only one Grand Rapids cycling law and it says that bicyclists cannot ride on the sidewalk within the Downtown Improvement District.

Finding the right bicycle for you is a matter of identifying your riding style and travel needs. With more than a dozen categories of bicycles available, it’s pretty easy to find an off-the-shelf match for any riding style.

Racing and touring bikes often use skinny tires with very little tread for speed that are quite dangerous on wet pavement and useless in dirt and sand. And there are more subtle considerations. For example, if you regularly ride for pleasure with a touring group but also commute to school, a commuter, city, or comfort bike simply can’t keep up.

Instead, you might consider a touring bike with straight handlebars that allow you to sit more upright when commuting and tires offering more tread. Fortunately, help for the subtleties is readily available from experts in bike shops all over the city.

Bicycles range in price from free to loan-worthy and seem to last forever, somehow avoiding planned obsolescence. If you spread the word you’re looking, often friends, neighbors, or family members are willing to give them away. Quality used bikes can be found at neighborhood garage sales for less than $10.