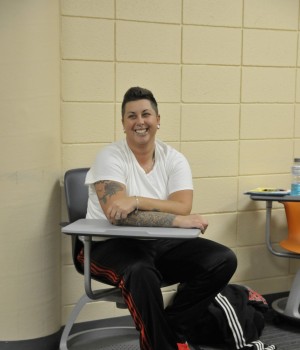 With several facial piercings, tattoos, and a buzz cut, Sarah VanSolkema isn’t afraid to be herself. However, she hasn’t always been so self-assured.

VanSolkema grew up in a middle class family in Wyoming, the daughter of a factory worker and compassionate mother, who ran a daycare from her home, until they divorced when she was a teen. She has two brothers and a sister. She maintains a good relationship with her mother, sister, and younger brother.

VanSolkema was born with three inguinal hernias in her groin area, bulges of soft tissue that can affect the lining of the stomach or intestines, causing weak spots in the muscles.

The cause was unknown and over the years she had eight more by the time she was 11. After undergoing many surgeries, it left her with lifelong bladder control problems that caused her a lot of embarrassment growing up.

VanSolkema chose the path of social work based on her life experiences.

At the age of 7, she started to intentionally hurt herself.

“I think when I was little, something fell on me, and I got attracted to the pain,” VanSolkema said, recalling how she would place c-clamps around her shins and smash them with a hammer.

She did this often, getting pleasure from the pain. It became an addiction that she hid from everyone, including both of her parents.

As she got older and the teasing ensued, the self-mutilation became worse. A self admission to Pine Rest years later in 2012 would lead her to open up to her mother about the wounds, but she hid it from her father completely.

She was unaware of the mounting physical consequences of this behavior. One day, when she was 19, she was holding her 18-month-old nephew in her lap and he traced the scars on her leg. In that moment, she began to rethink her choices of self harm.

“I just got sick to my stomach after he did that,” VanSolkema said about the simple act. “For so many years, nobody knew I did that, and for the first time, my first born nephew saw something. I decided I didn’t want to explain to a child why I had done what I’d done.”

She quit for a long time, returning to it a couple years later.

“In 2009, when I slipped and fell and busted my foot, they took x-rays of all this,” VanSolkema said. “They asked me why I had all these bone chips and things in my shin. I didn’t even know how to answer it, because by this time I was well into my 20s.”

The self inflicted wounds left scars, but that was only the beginning.

At 13 years old, VanSolkema said she was the one to find her childhood friend, just hours after she ended her life.

“Even to this day, I can still smell the gunpowder and the blood,” VanSolkema said about being in the room, only hours after her friend shot herself. “I was there until her mother came home, with her in my arms, bawling. I cried myself to sleep.”

“That’s why I struggle with PTSD really bad,” she said.

That same year VanSolkema lost her grandmother, and her brother lost his best friend and their parents separated. All these things happening at once created a toxic environment, planting the seeds of depression.

Throughout her childhood, she struggled with her gender identity. She knew she always felt like she was in the wrong body, but it wasn’t until she was 17 that she realized she wanted to be with women. She began to identify as a lesbian.

Shortly after coming out, she met her first love. She felt connected for the first time in her life to a family, however that, too, was short lived, as she lost her a couple years later. Moving forward wasn’t easy, but at 19, Vansolkema found strength in work. She worked long hours at various jobs, filling her schedule with distractions to numb herself.

Still healing, she fell in love again. Six years would pass with her new girlfriend, as they began building a life together, until the summer of 2008.

In August that year the relationship began to fall apart. She had been unemployed and was in the process of a discrimination lawsuit against her previous employer. This sparked an atmosphere of tension coupled with several depression medication changes VanSolkema had.

A small fight occurred one morning, and her girlfriend left. VanSolkema went to her mother’s house to cool down, returning a few hours later to an empty home. VanSolkema had reached a breaking point.

“Laying there, I just kept thinking to myself two things,” VanSolkema said. “I should just kill myself, and two that I wanted things to just stop.”

“The strange thing is I remember doing all of this like I was out of my own body,” Vansolkema said. “I did it quickly, without even giving anything else a thought.”

VanSolkema was found less than an hour later on the bathroom floor, by a friend, who had come looking for her girlfriend. Upon finding VanSolkema, the friend went to the neighbor and called for help. She learned later that she survived because she’d laid down in a fetal position. She had vomited and lost bowel control, helping her body rid itself of the toxins. By the time emergency crews responded, she had to be revived. After being stabilized at the hospital, she was put into an intensive treatment program through Pine Rest and was released to her mother’s care for two weeks.

“It was especially hard for me because she came to me and I thought we had talk ed everything through, and then the same day, she did try to commit suicide, ” her mother, Deb VanSolkema said, recalling the incident from 2008. “They wouldn’t let us leave without me signing a consent form that said I’d be with her. I took off from work to be by her side.”

Through this event, a closer bond began to build between VanSolkema and her mother, that wasn’t present before, and currently, is stronger than ever, as VanSolkema takes care of her mother, who now has stage four uterine cancer.

“Not a day goes by that I don’t thank my lucky stars for the few who intervened in my life that hot summer day,” VanSolkema said. “I’m not sure how I survived. They said I should have never lived. Because of this, I believe in miraculous things and have angels over me keeping me safe.”

Even though VanSolkema had an awakening, it wasn’t until enrolling in Grand Rapids Community College that her life took a true turn toward success. She met Patricia Murray, who worked within the Employment Services Department at GRCC. Murray encouraged her to go to college and even helped her enroll.

“I knew that she had the potential to go to college. I encouraged her and I believed in her,” Murray said. “It really didn’t take any more than that. She’s a strong woman who has had a lot of bumps in the road, but is doing this.”

VanSolkema gives credit to GRCC and StandOut for helping her become a more active community member. She has sought change in the school for the LGBTQQA community, including speaking out about the need for more unisex bathrooms around campus, a change that was included during the latest wave of campus renovations.

Being a part of StandOut helped VanSolkema find her true identity earlier this year and she is coming to terms with being transgender. To make her transition, she said she plans on having her breasts removed and changing her name, although she isn’t sure to what. She doesn’t feel any other surgeries or hormones are necessary.

She also helps the members of her group feel accepted. Miko Beute, 22, joined StandOut this fall and said he has been positively impacted by VanSolkema.

“She definitely has helped me,” Beute said, referring to VanSolkema. “She’s given me someone to talk to, someone to laugh with.”

“She is a very ambitious person,” Kittok said. “She has a lot of great ideas that she’s trying to get implemented in the group and just trying to make it better for years to come.”

Along with taking care of her mother, she also took care of her late grandfather with Alzheimer’s who died in 2010.

“She did a wonderful job with my dad,” her mother said.

Currently, VanSolkema continues to be an advocate for others going through similar hardships.

She volunteers on Tuesday nights at GIFT (Gays in Faith Together), a nonprofit organization, that according to their website, is “working toward the affirmation of gays, lesbians, and transgender (LGBT) persons of faith communities in West Michigan.”

Cami Mann, 49, who volunteers at GIFT with VanSolkema, said she sees her dedication to personal growth.

“She’s very open and honest with people,” Mann said. “Sarah brings a spirit of acceptance to the young people, and she’s very attentive to what they say and what they are experiencing in their lives.”

VanSolkema’s love of people and life can be found in the tattoos and piercings, that now replace wounds of self-mutilation, and represent love and loss in her life. She said they give her strength.

One of the quotes tattooed on her, she said, captures the central theme of her life now, “If you don’t live for something, you’ll die for nothing.”

The night before a major surgery to remove her cancer, VanSolkema’s mother said, “We’re so much alike…. I learn from her and she learns from me. It’s been a hard year for everybody, especially her. In the last couple years we have become a lot closer. She’s been my caretaker in more ways than one. She gives me encouragement to go on.”

All of VanSolkema’s tattoos carry meaning in her life.