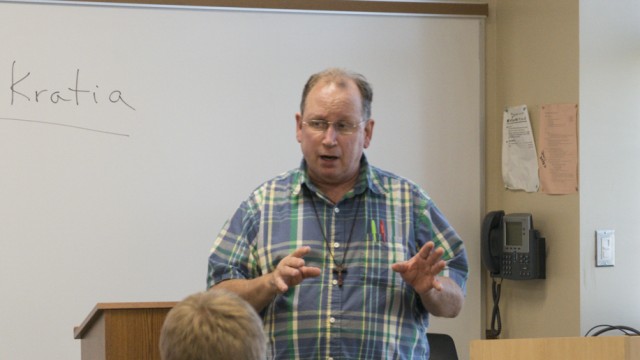 Documents obtained by The Collegiate under the Freedom of Information Act state that Lee was found to have violated two GRCC policies on sexual assault and consensual relationships with students or subordinates. Before charges could be brought to the board of trustees, Lee resigned.

According to the corrective action notice dated Jan. 8, Lee and a student met off campus on Dec. 11. Both consumed alcohol, with Lee admitting to “three to four beers while at the bar.” More drinks were ordered later at the table and Lee allegedly shared “disgusting details” about his life with the student, including “affairs” he’d been involved in and “an addiction to pornography in his past.”  Before leaving, Lee “asked for a hug.” and the student “resisted.” Lee admittedly “pulled (the student) towards him” and kissed the student “three times over the course of several minutes.”

The corrective action notice also documents Lee’s admission that “that he had no indication this behavior was welcome,” and that nothing the student did encouraged the kisses. He stated he “did not think” and “had it not been for the drinks, he would not have engaged in this behavior.” Lee “made multiple calls” to the student “that same evening.” The student “blocked Lee’s phone calls following the repeated calling.”

Executive Director of Human Resources Cathy Kubiak wrote in Lee’s corrective action notice: “Lee’s behavior…was harassing, caused embarrassment, and was sexual. Lee’s behavior is a violation of his professional ethics and responsibility as a faculty member at GRCC.”

Lee was not able to be reached for comment.

A second incident involving another individual was brought up in Lee’s corrective action notice.

“Something had happened in his office at GRCC while he was employed here that was inappropriate and played a part in our ultimate decision,” DeVries said.

On Dec. 18, following a complaint received by Provost Laurie Chesley, Lee received a letter from Kubiak informing him that he was being put on a paid suspension pending investigation. Lee was instructed to not have any further contact with the student involved.

Lee was a full-time humanities professor.

Mike Vargo, dean of the school of arts and sciences at GRCC, was Lee’s supervisor. Vargo said he wants to continue to create a safe culture at GRCC, where students feel comfortable coming forward with any concerns.

“One of the complaints that gets lodged against institutions, even from the federal level, is that schools don’t investigate these complaints quickly enough and that there’s potentially a lot of concern if this is allowed to drag on,” Vargo said. “It’s terrible and tragic that we have to deal with those things, but if we have to deal with them we can at least do it as competently and expediently as we can.”

Lee was hired in February 2001 as a Humanities Instructor with a yearly salary of $43,863. By June that year, Lee received approval for a three-year faculty contract with an annual base salary of $45,398. In August 2003, Lee was granted tenure. Lee was informed of a promotion on the merit schedule in June 2015. His pay was set to be raised for the following year to $88,805.

Upon resignation, Lee did not receive a severance package. His benefits lasted until the end of January, the month he resigned.

“I think it’s terrible that things like this happen,” Vargo said. “We can try to prevent as much as we can through education and making sure people are aware of practices and policies and expectations among our faculty and staff and students.”

GRCC Title IX Coordinator Kimberly DeVries said one of the reasons why her office exists is to help students, and staff or faculty, in sexual misconduct situations, whether it be involving a student, staff member, or someone off campus.

All GRCC employees are considered ‘responsible employees,’ meaning they have a duty to respond and report situations involving sexual misconduct.

If any employee finds out about any violation of policy including, but not limited to, sexual assault, sexual violence, domestic violence, dating violence, harassment, stalking, and any incident based on sex, they are required to report this information to any deputy coordinator. These individuals include DeVries, Labor Relations and Equal Opportunity Generalist Deborah Sanders, GRCC Police Chief Rebecca Whitman, Athletic Director Orletta Caldwell, and Provost Laurie Chesley.

“A student could really report to anybody,” DeVries said. Reporting is telling a GRCC employee what happened via email, phone or in person. DeVries encourages written statements, but it is not a requirement.

If a student wishes their situation remain confidential, they can schedule an appointment in the Counseling and Career Center, located on the third floor of the GRCC Student Center. The counselors can only report if they have permission from the student or if the person is a danger to others or themselves.

In the past, students involved have been temporarily removed from clubs or organizations or have switched class sections.

“If it involves somebody at GRCC, then we can take steps to separate those two people while we investigate,” DeVries said. “Whatever the reporting student wants, that’s where we would ask those questions.”

If no one is in danger, then the student can choose to not do an investigation. DeVries said arrangements can always be made to make a student more comfortable on campus.

“We want students to know that there’s resources here, that you can report, and that we’re going to treat you fairly,” DeVries said.

Any student reporting sexual misconduct is given a brochure outlining community and campus resources, including information about the Young Women’s Christian Association, support groups, and community counseling.

Students are also informed about the GRCC police escort service, where officers are able to escort students to their car in parking ramps and from class to class.

GRCC is able to communicate to the student’s professors about the situation, if a student may need to take a couple days off or take a test in the testing center.

“There has not been one faculty member that I’ve contacted for a student who has been difficult about accommodating some sort of issue like this,” DeVries said. “Faculty want to help, they just don’t know always what the problem is.”

“We want you to be able to focus on your education and learning and not be distracted by these issues that get in the way sometimes … There are so many stories of people who have these situations and then drop out or withdraw and we don’t see them again,” Devries said. “So what we’re trying to do is make sure that doesn’t happen. Because if you’re here, we want you to stay here until you’re done.”