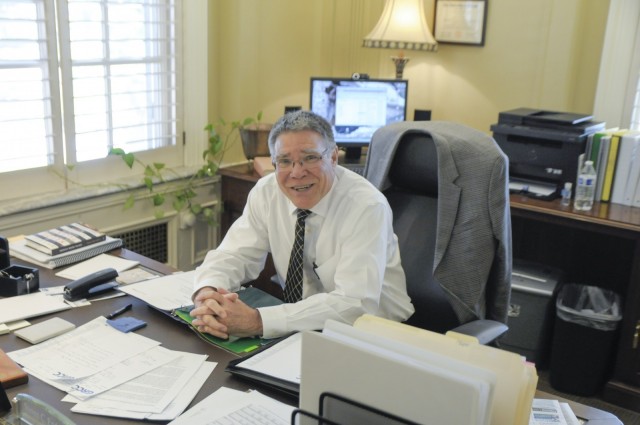 Grand Rapids Community College will be searching for a new president soon as GRCC President Steven Ender has announced his official retirement for June 30, 2017, the end of his contract with the college.

“There are going to be some big shoes to fill,” said Bert Bleke, chairman of the GRCC Board of Trustees.

Ender told attendees March 17 that he’d been thinking about retirement since the 100-year celebration in 2014.

“It’s something I’ve been thinking about,” said Ender, 66. “It’s been a long career, a big career. I’ve got some years left in my life, I want to figure out the next phase and if I wait for my work to be done here, it’ll never be done.”

In the upcoming year at GRCC, Ender has a few things he wants to have accomplished.

“Students having someone on the campus to go to consistently is something that’s really important to me, so we’ll be spending some time with that,” Ender said. “We’ve got two capital projects that I’ll probably be doing some fundraising around, some work in the Main Building on the first floor, more of a centralized student services center, and the Ford Fieldhouse needs a ton of work.”

Ender also plans to help the board in the search for the next president of the college.

In the seven years as GRCC’s president, Ender found it hard to choose the best moments he’s enjoyed at the college.

“When we finish the Music Building and the construction of the Early Childhood (Center), that’ll be a little over $60 million dollars in large deferred maintenance and renovation projects that we’ve completed during my time as president,” Ender said. “Most of that money we’ve had to generate through our budget and through philanthropy and donations. We’ve received $5 million from the state for that $60 million in projects, so I’m very proud of that.”

“I think we’ve kind of turned the culture away from employee compensation being automatic and step-based into a performance-based system across the campus,” Ender said.

“A lot of nice things have happened during my time. This is a great group of people I work with and I like the way we’ve moved the institution forward.”

Ender has been involved in higher education for over 40 years. Before becoming president of GRCC, he was the president of Westmoreland Community College in Youngwood, Pennsylvania. He is married with two children and four grandchildren. He said he and his wife, Karen, have not made any plans to leave Grand Rapids.

As a first-generation college student, Ender feels strongly about the importance of education.

“My father had a high school degree and my mother had a GED,” Ender said. “Without education, I would not be sitting here.”

Ender said the joy of his work, especially at a community college, is helping students better themselves.

“(Education) opens doors that will not open without credentials,” Ender said. “I would say to our students, to leave here with at least one credential, whether it be a certificate or an associate’s degree.”

Bleke said the board is well prepared to move forward into the new presidential selection process.

“Steve has done a tremendous job over the years here,” Bleke said. “He has positioned us so well for the future. The entire board is very grateful for his service to the college and the community.”

The process will begin at the next board retreat on March 23, although the board has been discussing presidential succession over the last few months. Bleke said one of the first responsibilities will be to assemble a search-firm on campus.

“We will move forward in a very open matter that engages the campus community,” Bleke said.

An email will be sent to the campus community tomorrow morning, in which  Bleke said he planned to officially address the president’s retirement.