Ohio Governor John Kasich picked up his first primary win in his home state tonight while Donald Trump won big, forcing Marco Rubio out of the race. Hillary Clinton swept the field on the Democratic side.

Although five states held primaries, Ohio and Florida were the two big prizes up for grabs for both parties. This was the first night where Republicans allowed winner-take-all primaries. All Democratic primaries are awarded proportionally, usually by congressional district, counties or precincts.

Florida, Missouri and Ohio were all winner-take-all for the GOP. Missouri was too close to call at press time.

Clinton’s biggest victory of the night was in Florida, where she beat Senator Bernie Sanders by more than 30 percent. She also won Ohio and North Carolina by double digits. Illinois and Missouri were split nearly evenly, with Clinton winning Illinois by less than 2 percent and winning Missouri by approximately 1,500 votes at press time.

Kasich picked up 66 delegates in Ohio and gave his first victory speech of the cycle in front of a home crowd in Columbus.

He thanked his supporters and told them that he’s heard them when they ask why the moderators don’t call on him during debates, but doesn’t want to get into the fray with the other candidates.

“I will not take the low road to the highest office in the land,” Kasich said to thunderous applause.

He then pledged to break the gridlock in Congress.

“The challenges we have, we can go to Washington in the first 100 days with a shock and awe agenda that can pass,” Kasich said. “I think we can rally the people in Washington because I’m going to remind them that before we’re Republicans and Democrats, we’re Americans and we have an obligation to uphold.”

Kasich’s strategy toward the GOP nomination is to be the last establishment candidate standing with Trump not winning a majority of the delegates. He’s one step closer to that tonight with Rubio suspending his campaign.

In his announcement, Rubio warned of the feelings Trump’s campaign is stirring around the country.

Tonight’s primaries come after a long weekend of violence swirling around Trump rallies in North Carolina where a supporter elbowed a protester being escorted out of the arena and in Chicago where an event was cancelled due to protests which had turned violent.

Grand Rapids Community College student Lexy Linthicum, 18, of Grand Rapids said Tuesday afternoon that the protests should be less violent and more controlled, but laid some blame on Trump himself.

“You can’t just say rude things and expect there to be no reaction from the public,” Linthicum said. “I mean, you’re speaking to an entire nation. I don’t think he should be allowed to speak anymore.”

“He’s just a loudmouth, if you think about it,” Diaz said. “If you listen to (him at) political debates, he goes back and forth and makes no sense.”

For the third week in a row, Trump’s speech came from a ballroom in his Mar-a-Lago estate in Palm Beach, Florida. He won Rubio’s home state of Florida by 19 points. Trump said he won despite numerous attack ads against him.

“This is my second home, Florida,” Trump said. “To win by that kind of a number is incredible.”

Trump also took his usual jab at the press while he reflected on the process of running for president.

“This is a really interesting process, really an amazing process,” Trump said. “It’s very tough, but If you can get to the end you can handle a lot of things including pressure. There’s nothing like it. Lies, deceit, viciousness, disgusting reporters–horrible people. But some are nice.”

With Trump’s victories tonight, he is now halfway to the 1,237 needed for the nomination. If Trump fails to reach that magic number, the Republicans will have a contested, or open, convention where delegates will be up for grabs after the first ballot.

The only way Trump can win the nomination on the first ballot without 1,237 delegates of his own would be to convince the delegates of candidates who have suspended their campaigns to pick him instead. According to GOP rules, delegates who were awarded to a candidate who’s dropped out are considered unbound, free to vote for whichever candidate they choose.

The last time the country saw a convention where no candidate had a majority was 1976, where President Gerald R. Ford had to do precisely this to defeat Ronald Reagan’s candidacy.

If Trump still doesn’t manage to gather the necessary number on the first ballot, then all delegates become unbound and anything goes. 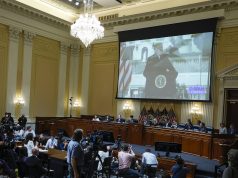