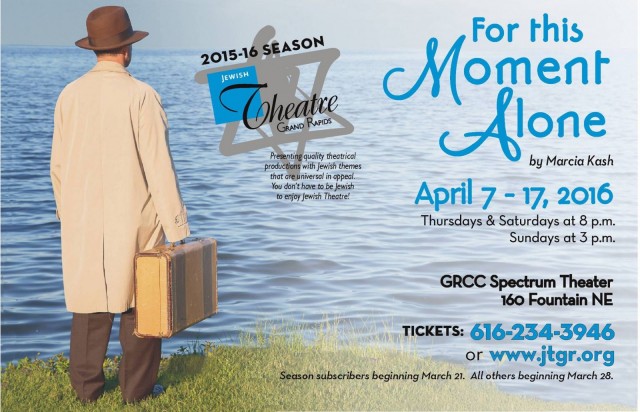 A large crowd turned out for the Grand Rapids Jewish Theater’s opening of “For this Moment Alone” April 7 at the Grand Rapids Community College Spectrum Theater. The show runs through April 17.

The play is set in 1948, with a Jewish family trying to get a family member to their home in Toronto. It is not until they go to meet him (Freddie) at the train station that they discover another man has assumed his identity and taken his papers in order to escape war-torn Germany after WWII.

“It’s a tough subject matter when you are dealing with the Holocaust,” Marlett said. “There are moments of hope and lightness in the show. It shows us you can get through tough moments in life and survive.”

The title itself is a Talmudic reference that when a person does a good deed for another that they aren’t compelled to do suggests that hope exists for humanity. The family is forced to consider at what point you stop helping your fellow man as well as come to terms with what it means to forgive, accept and survive.

Professional theatre director, playwright and actor Marcia Kash wrote “Thicker Than Water” for the Canadian Broadcast Corporation drama commission in 2011 that would eventually become the stage version re-titled “For this Moment Alone.”