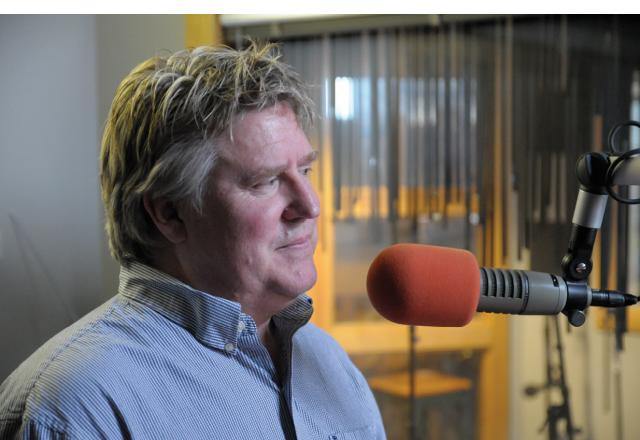 Mike Kennedy used to sell Twinkies.  As a driver for Hostess Brands, he would drive his route along Michigan’s western coast from Norton Shores to Port Sheldon delivering snack cakes to vendors.

That all changed when the company went bankrupt and Kennedy was let go from his job in November of 2012.

Kennedy, 53, of Kentwood could have done a lateral move with another company and gotten back into sales but he wanted to do something with skill and decided on information security.

Using the Michigan Works Program, a program that assists people who have lost their jobs with retraining and education, Kennedy was able to start at Grand Rapids Community College in August 2013.

When asked if he is enjoying school and being a student a big smile came to Kennedy’s face, along with the answer, “I love it.

“It is hard to schedule classes around shows I want to go to. Lush is playing on a Monday in September at Saint Andrew’s in Detroit,” Kennedy said. “I have a physics class that night and will not be able to go to the concert.”

Kennedy is going to summer camp, Electric Forest and Pearl Jam this summer.

Besides being a student, Kennedy is in his 20th year volunteering at a local nonprofit, the Community Media Center, where he is a programmer for the local radio station 88.1, WYCE.

“I am a volunteer programmer.” Kennedy said. “People would like to refer to us as deejays but we are not told what to play, when to play it and how many times to play it so we call ourselves programmers.”

Not knowing what the next song is going to be, Kennedy is one of the 75 volunteers that are the last bastion of what real radio is.

“People ask what we play and I tell them everything and any-thing but hair bands, gangster rap and corporate country,” Kennedy said.

Listening to the station you could hear anything from Frank Sinatra to the Sex Pistols. The radio station plays an eclectic mix of jazz, rock, blues and world music.

“If I come across somebody that has not listened to WYCE I tell them to listen four or five times throughout the week because it is like the weather, always changing and never the same,” Kennedy said.

Kennedy describes himself as the epitome of a “broke ass college student,” who is married, having met his wife on a blind date while in high school. He first saw his wife at a Halloween party in 1980. She was dressed as a Southern belle and Kennedy was too shy to talk her. He just stayed in the corner playing music.

Kennedy’s first date with his wife was to a high school play, “South Pacific.” Kennedy used a line from the play, “I consider it a good night when I get a hand-shake” on his future wife at the end of the date.

“I barely kissed her goodnight that night and 36 years later it’s still the same,” he said, with a laugh. “I still shake her hand.”

Kennedy said he does do some things around the house. His wife cooks and does the dishes. He does the laundry and studies.

“I am doing really well in school,” Kennedy said. “I have been on the Dean’s list six out of the seven semesters.

”With a grade point much higher than in high school, Kennedy attributes the new success to time management, utilizing the tutoring system and talking with the professors and fellow students.

“It’s been fun. I don’t mind be-ing the old man in the back row screwing up the curve,” Kennedy said. “I have had great professors and I have been challenged in all my classes.”

As a full-time student taking 12 credit hours, he found 15 was too hard. Kennedy offered some advice to younger students and to the college.

“The one thing they (the school) should tell a first year student is look out for week nine and week 10 because that is when everything comes to a head,” Kennedy said. “Your term paper is due, you seem to have tests in your other classes.”

To students, Kennedy suggests to get points early instead of falling behind later.

“Do your homework, read and participate in the class and you will not be struggling at the end of the class,” Kennedy said.

Kennedy never thought he would make it through, but he has been able to move on with the help of the tutoring that GRCC offers.

In one of his classes, the class developed an app for Grand Rapids Festival of the Arts. It was part of a 2015 Armen Awards project and the team came in second place.

“It was a great learning experience to be on a team,” Kennedy said. “Being in nonprofit I know what it’s like when the dollars are not there. It was a worthwhile challenge to help out on something that has been in Grand Rapids for over 40 years.”

As one of the senior members on campus, Kennedy gave a few philosophical suggestions to the younger generations of students attending GRCC.

“Be nice to everybody because you never know who you are going to run into later in life.  Everybody should dance. Stealing a line from the ‘Interns’,” Kennedy said. “Look up three inches. There is a world out there. Get out of your phone.”