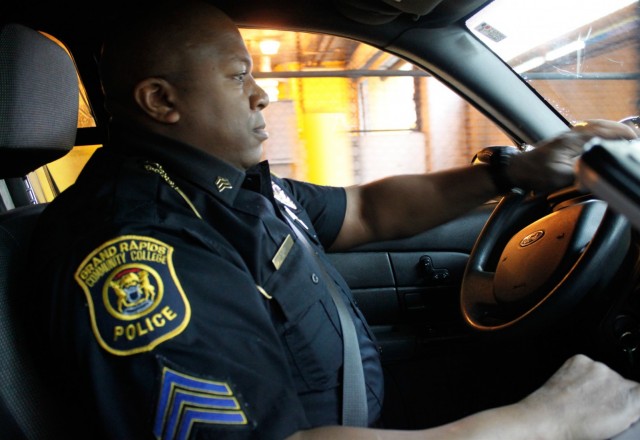 He holds open doors, socializes with students and lives with ‘to serve and protect’ as his life motto.

Heard plays a major part in motivating students to continue on their journey for success.

“He’s been a great help to our students and a great resource,” said GRCC Admissions and Enrollment Coordinator Francisco Ramirez. “You need mentors, like Jesse, on campus to be a successful student and it’s awesome that we have him.”

Heard said he’s enjoyed being more of a friend to students than anything else. On his foot patrols around campus, he’s constantly greeting students, opening doors and being a friendly figure to everyone he meets.

“My favorite part of my job is talking to students,” Heard said. “That’s why I work here. I like communicating with the youth, learning a little more about what they do, what they’re going to be doing, what they are studying and helping to motivate them and keep them going because they’ve gotten this far.”

Since he was young, Heard, 49, has always respected law enforcement.

“I’ve always had an interest in law enforcement,” Heard said. “I was in first grade and I got into a police cruiser and the guy (police officer) showed me all around the car … I was like ‘Ah this is really cool, this is what I want to do.’”

Football was Heard’s dream growing up, and he held a special place in his heart for it.

Heard played running back for the East Kentwood High School varsity football team and played in the Michigan High School All-Star Game after graduation. In the game, Heard broke his neck, but it didn’t stop him from trying to follow his dream of playing professional football.

“I went as far as I could in football,” Heard said. “I ended up going to Ferris (State University) and then I left there … so then I ended up playing semi pro football with the Grand Rapids Crush. I was All-American in that league.”

Heard went on to try out professionally for the Pittsburgh Steelers, but was turned down because of his previous neck injury.

“I finished out the rest of the week, of course I got cut, but it was just a good experience,” Heard said. “I was glad and still am glad I experienced it.”

Heard went on to box in the Michigan Golden Gloves league for a year in 1987.

“I ended up winning the city tournament,” Heard said. “It was for the Michigan Amateur Golden Gloves … I had Buster Mathis as a trainer as well as Floyd (Mayweather) senior who helped out and trained me … it was fun but I figured out you’re gonna get hit, you’re gonna get your bell rung a few times … and it just wasn’t for me.”

Athletics was Heard’s goal, but he decided it was time to try other opportunities.

“I was an athlete first,” Heard said. “Football was my dream, but I had to have a plan B.”

Heard has been with GRCC since 2002. Before that, he worked as a security guard for Grand Rapids Public Schools from 1994 until 2002. He takes extra pride in being able to mentor and coach the “troubled kids.”

“I try and get them in the right direction,” Heard said. “That stems from the public schools when I worked there … as a security guard. They had a lot of troubled kids, a lot of kids that didn’t have a mom or a dad, or living with their grandparents and I tried to help those kids because they don’t know any different, they only know what they’re raised in.”

For most of his childhood, Heard was surrounded by a negative environment at home. He is glad he experienced it, however, as it has allowed him to understand where the “troubled kids” are coming from.

“To me it made me a better person,” Heard said. “When I was that troubled kid, I was an angry kid, mad at everything, (I thought) everybody was against me … it made me more understanding with the troubled kids.

“Where some might go, ‘Oh, he’s a troubled kid, he’s a knucklehead, or a bad apple,’ whatever it is, without realizing, you don’t know what they’ve been through. It might be something else. You never know what it is, but I think I get a better understanding. So when I deal with people in the community, or kids that have been through a lot, I think I can read them a little better.”

Heard thinks that this ability to “read” people has also helped him as a police officer.

“It has helped with the calming down factor,” Heard said. “I’m always saying ‘Hey, calm down. I’m here now, bring it down, you can stop’ … I don’t judge right away. I don’t jump to conclusions. I try to figure the person out and do so safely.”

After some trouble at home, Heard was welcomed into the home of his high school head football coach Bob Friberg and he said he appreciated the experience of living with his football coach because it allowed him to “live in both worlds” and realize that there was more to life than what he grew up in.

“Living in the environment that I was in and moving over to living with my football coach, totally different,” Heard said. “I’m glad I experienced both worlds … getting myself more educated, knowing right from wrong.”

He got close enough with the Friberg’s family that he considers them an extension of his own family.

“I have three brothers and a sister on that side,” Heard said. “And that’s what we call each other, brothers and sisters … it kind of blows people’s minds when they see us because we call each other that… and we all spend the holidays together … I still see my other family too and things have gotten better on that end, but I’m really just lucky enough to have the two families.”

Heard takes pride in his position at GRCC.

“I’m basically in between the management positions and the officers, the guys I work with,” Heard said. “I’m still a part of the union and I listen to what they (police officers) have to say and what Chief has to say … you have to find the right balance between the two, but it’s still great to work with both parts.”

Officer Kam Robles, who’s been with the GRCC Police Department for about six months has already felt the positive impact Heard has on people.

“Since I’ve started here, he is probably my prefered type of leader,” Robles said. “He likes to get out and do the same stuff we (police officers) do. Not that I would expect that out of every single leader, but I think that someone who is able to supervise people efficiently and fairly and at the same time get out and do the work themselves earn a new level of respect from me.”

Heard has committed to GRCC and he plans to stay for the rest of his career.

“I love this place,” Heard said. “This is it for me, I don’t plan on going anywhere … at first I was thinking I was out of here after three years. Those three years went by and by that time, I realized that this place was really meant for me.”

After Heard retires from law enforcement, he plans on spending more time with family.

“Usually when I get out of work, I get out at 11 o’clock at night, so it’s kind of hard on my family. I was still able to make it to my kid’s sporting events by taking time off a little bit here, a little bit there, but I see them in the morning and then I don’t see them until the next day. So I’ll enjoy seeing them more.”