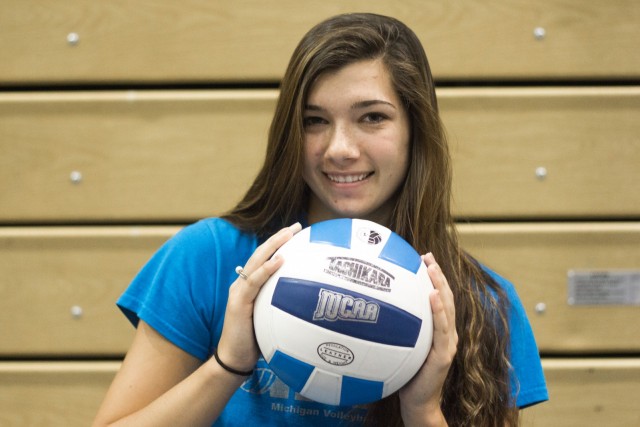 Volleyball hasn’t always been a cakewalk for Lauren Wieber, the starting outside hitter for Grand Rapids Community College.

Wieber starting playing volleyball at her first summer camp when she was about 10 years old, which her mom forced her to attend. She fell in love with it and continued to practice volleyball at home for many years.

She chose to play at GRCC because she knew she didn’t want to stop playing and wanted to make her mom proud because she had always loved the sport.

Wieber explained that she was not the best player coming out of high school and recalls being the fourth or fifth hitter. She said GRCC Head Coach Chip Will helped her improve her game.

“I think Chip saw athleticism in me,” she said. “My first week here working with our coaches, something just clicked with me, and then I started generating points for our side.”

Wieber said nothing really came easy to her with volleyball. “I always had to work really hard,” she said. Wieber said she’s working on smart shots when it comes to court vision, but she can put a lot of speed on the ball.

According to Wieber, the toughest part of volleyball is the mental aspect of it. “Volleyball is 50 percent a mental game, and obviously the rest is physical,” she said. “The attitude that I put on the court isn’t just for me, it’s for everybody else as well.”

Wieber models her game after Dolly Santana, a 6’1” outside hitter from University of Minnesota. Wieber described how she is similar to Santana when it comes to volleyball because they are both undersized. Lauren is only 5’9”. “She puts up a lot of points and she is a very, very dynamic player and I aspire to be like Dolly Santana,” Wieber said.

Wieber finds motivation each day because she knows she wants to excel in the classroom and on the volleyball court. She said she loves to wake up every morning and play the sport that she loves.

So far, Wieber has not been in contact with any schools yet on playing volleyball after Grand Rapids Community College, but said, “If the opportunity arose I think I would definitely take it. As much as I want to focus on school, I can’t picture myself not playing.”