At 9:21 p.m. Oct. 31, a man came into the Grand Rapids Community College Police Department to report a theft of his newly purchased bike.

The man said he bought the bike off of Craigslist at 3:30 p.m. that day. He said he rode it to class and locked it up at 5:30 p.m. When he was finished with classes, he came back to the bike at approximately 9:15 p.m. to find his bike missing along with the cable lock he used to secure it to the bike rack.

The man said it was a purple Motobecane “Lurch” bike with “fat” tires.

The officer addressing the situation told the man he would contact the surrounding pawn shops and bike shops and see if anything had been bought by them.

The officer contacted eight local pawn shops but no one said they had bought anything that matched the description of the stolen bike.

At 11:57 a.m. Oct. 31, a student came into the GRCC Police Department to report that someone had stolen her iPhone while she was in the bathroom.

She said she was sitting on a bench outside of the computer lab on the second floor of Cook when she got up to use the restroom. She got up with her backpack and went to use the restroom and then went to class after. She realized in class that she didn’t have her cell phone and the last time she remembered having it was when she was outside of the computer lab in Cook.

The student said there was a younger black male sitting next to her when she was on the bench, but when she got up to use the bathroom and came back, he had left.

She said she tried to call the cell phone, but no one answered. She tried a second time, but it went right to voicemail. She said that the phone is untrackable when the phone is turned off.

The officer explained that there wasn’t much the police department could do for her except report it missing. The officer told the student to get the serial number of the phone, if she can.

The officer said he would check the local pawnshops for a cell phone matching the description.

When the student called the officer to give the serial number, he entered the phone into the GRCCPD database as stolen.

At 10:21 a.m. Oct. 27, an intoxicated male came into the Student Center and was asking for help to get into an alcohol rehab center. The secretary was telling the man where to go when officers arrived and talked to the man.

The officers first noticed an intoxicating smell coming from the man and so they asked him to step into the hallway.

When the officers started talking to the man, he verbally identified himself and said he was a student “back in the day.” He advised the officers that he had been denied admittance into Jellema House, a halfway house in Grand Rapids, because of his uncooperative nature and his consumption of alcohol. He had apparently drank a pint of vodka earlier in the day.

During the conversation the man had with the two GRCC police officers, he started to become agitated, belligerent and began to cry. The officers reminded the man that they were there to help him, not make him feel uncomfortable.

The man refused assistance from the officers and insisted on leaving as he felt he was being detained and threatened.

As officers issued the man a verbal warning for trespassing, the man refused to listen and proceeded to give the officers an obscene hand gesture.

As the man walked north on the west sidewalk of Ransom Avenue, he took off his black sweatshirt and threw it in the street. The officers found nothing in the sweatshirt, and proceeded to patrol the area to see if he had left campus. They never found him. 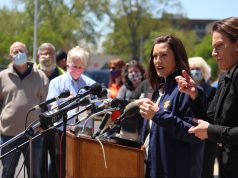 The 1975 presents “Notes On A Conditional Form;” an album review