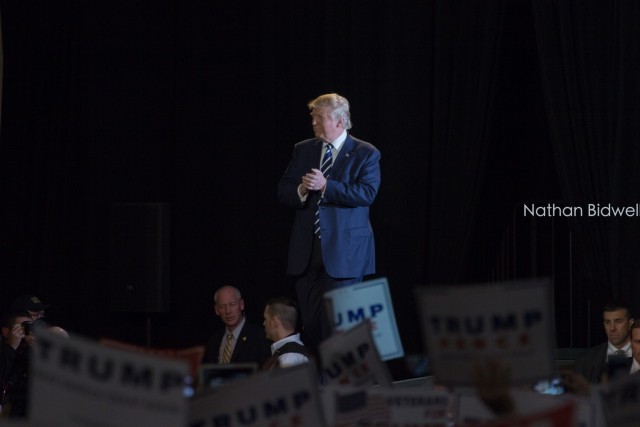 Donald Trump won the presidency of the United States in a close race against Democratic rival Hillary Clinton.

Trump spoke to supporters in New York, thanking them for getting him there.

“Now it’s time for America to bind the wounds of division, we have to get together,” Trump said. “To all republicans and democrats and independents across this nation, I say it is time for us to come together as one united people.”

Clinton gave her concession speech Wednesday morning. She said while she is disappointed she did not win the election, she is advocating for a peaceful transfer of power.

“This is painful, and it will be for a long time,” Clinton said. “But I want you to remember this. Our campaign was never about one person or even one election. It was about the country we love and about building an America that’s hopeful, inclusive and big-hearted. We have seen that our nation is more deeply divided than we thought. But I still believe in America and I always will. And if you do, then we must accept this result, and then look to the future.

“Donald Trump is going to be our president. We owe him an open mind and the chance to lead. Our constitutional democracy enshrines the peaceful transfer of power and we don’t just respect that, we cherish it.”

Following Clinton, President Barack Obama said he is supporting a successful and peaceful transition of power.

“We are now all rooting for his success in uniting and leading the country,” Obama said. “The peaceful transition of power is one of the hallmarks of our democracy. And over the next few months, we are going to show that to the world.

“I hope that he maintains that spirit throughout this transition. And I certainly hope that’s how his presidency has a chance to begin.”

Florida, Pennsylvania, Michigan and Wisconsin were the swing states that were being watched closely as the final votes were being counted.

In other local election news, Kathleen Bruinsma, David Koetje and Kenyatta Brame won the three open seats in the Grand Rapids Community College Board of Trustees.

A majority of Kent County residents voted yes for the Zoo millage and the 9-1-1 dispatch millage.

The following candidates won in their respective elections in Kent County:

This story was updated at 3:49 p.m. Nov. 9 to include comments from Clinton and Obama’s speeches.