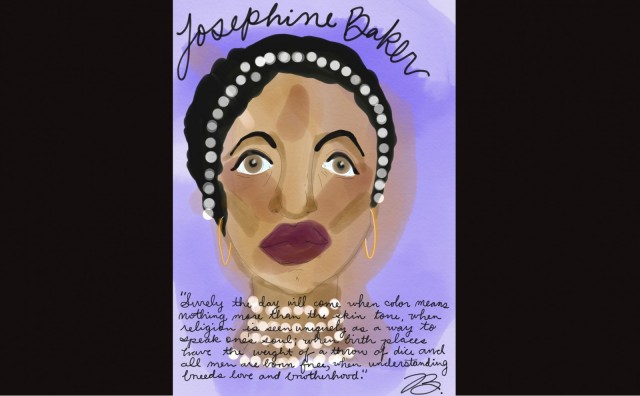 As we near the end of Black History Month, Collegiate cartoonist Joanna Barcelo has created a tribute to Josephine Baker.

Josephine Baker, was born Freda Josephine McDonald on June 3, 1906 in St. Louis, Missouri. The discriminatory behavior in the U.S. drove her to France in the 1920s. Baker returned to the U.S. to stand with the Civil Rights movement. She participated in demonstrations and boycotted segregated clubs and concert venues. She marched with Martin Luther King, Jr. in the March on Washington and was a speaker. The National Association for the Advancement of Colored People named May 20 “Josephine Baker Day” for her efforts. She returned to France during World War II to work for the Red Cross, entertain troops in Africa and the Middle East, and work for the French Resistance. After the war, she was awarded both the Croix de Guerre and the Legion of Honour with the rosette of the Resistance. Following the war, Baker married and adopted 12 children. She called them the “rainbow tribe,” because they were of every race. She enjoyed showing off her diverse family to the public. On the day of her funeral, more than 20,000 people lined the streets of Paris to witness the procession. The French government honored her with a 21-gun salute, making Baker the first American woman in history to be buried in France with military honors.