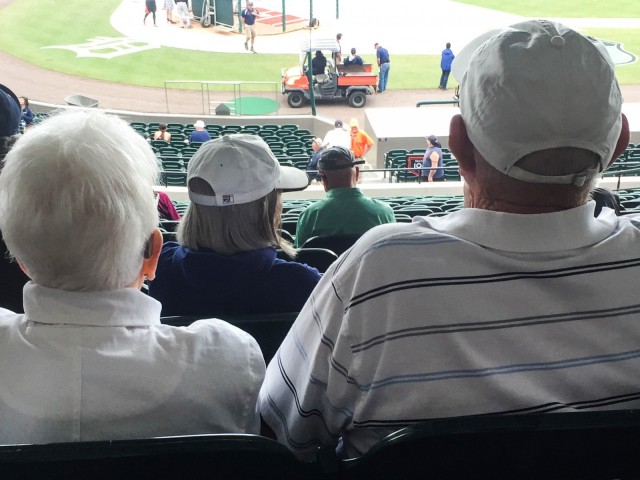 The first thing you think of when you think about baseball is probably peanuts and Cracker Jacks, the crack of the bat or soft grass and dirt. But did you ever stop and associate love with America’s pastime?

Doris and Fred Livingston, both 83 of Lakeland, Florida, have been at it a long time – 59 years to be exact.

It’s at the stadium’s top row where the couple observes batting practice before each game and takes in the majesticity of Lakeland’s Joker Marchant Stadium. There, they can view the entire field, watching over the first base dugout as their beloved Tigers’ take the field each day.

“I’ve loved this game since I was just a lad,” said Fred, a gentleman who moved to Lakeland in 2006 with his wife, Doris.

“I never thought it would be so joyous to do every single day,” Doris said. “I used to tag along just for Fred, it made a good date,” she said in between giggles, “but it has definitely become a normal part of my life.”

The pair are at peace with their atmosphere at each game. Fred smiles ear to ear as Doris watches the child in her husband shine outwardly.

Fred has been an avid Tigers’ fan since he was playing in his neighborhood with his buddies, in the 1900’s. Fred was born just one year before the Tigers’ first ever World Series championship. When the Tigers made their second run in 1945, just 10 years later, Fred said he begged his father to take him to see them win it all.

“Oh, I read all that I could about the Tigers,” Fred said. ”My pop would tell me such great things.”

He never made it to the park in 1945, but as soon as he could drive, he frequently watched the Tigers battle at Tigers Stadium.

“I went to my first Tiger game in 1952,” he said. “You bet they won just for me. I didn’t stop going to games, even when I met Doris a few years later. I dragged her along.”

“When I was younger, all I wanted to do was be a nurse,” Doris said. “I had my life planned out.”

At the time, Fred seemed less concerned about the future.

“When I met Fred, he was such a loser,” Doris said laughingly, recalling how he seemed to care more about sports and having fun than his job. But he also had an optimistic energy, “and it wasn’t long until we were just in love,” Doris said.

Fred had worked in a factory where his father had previously worked, before becoming a part-time baseball coach in Ann Arbor, Michigan.

“Age 34 was my prime. I had a wonderful wife and I finally watched the Tigers’ win a pennant over the Yankees,” Fred said. That year, in 1968, the Tigers were crowned champions.

The way Fred talked of that year, you’d swear he was one of the World Champion Tigers’ players. He talked with so much pride that Doris even gave a little eye roll, yet Fred had no idea he was rambling away, probably for the thousandth time, about his “glory days”.

Years later, shortly after retirement, Fred and Doris decided to move down from Ann Arbor to the Sunshine state, just minutes from the Tigers’ spring training home.

“Well, it is just beautiful, perfect for me, really, when you think about my life,” said Fred. “And Doris has only made this better. I chose the baseball journey, and she chose us both.”

“This really is more than a game. The place brings us such enjoyment, and just being here, you can feel the love … through Fred’s love, we’ve fallen more and more in love,” Doris said.

“People ask me if I ever get sick of it. I say her? Oh no, she’s still alright,” Fred said, “The game, never. And we only get more interested.”

The couple has lived in Lakeland for 11 years and plans to go to as many spring games as they feel up to walking to, since they live just blocks away. When asked if I could get a picture of them, they said, “oh great idea,” and then insisted we capture the very sight that they get to see each day at the ballpark, in their favorite seats up high in the sky above the Tigers’ dugout.