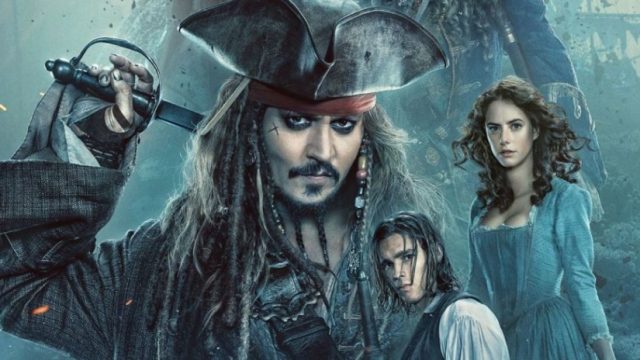 In June of 2003 The Walt Disney Company & Jerry Bruckheimer released the first of their blockbuster franchise “Pirates Of The Caribbean”. “Curse Of The Black Pearl” was considered by many to be a fun, interesting adventure, even though it was based off a water ride. (I’m still surprised we have five of these movies, and not one sub plot about those horrendous gift shops).

After the first movie, a good lot of critics and fans started to lose interest in the sequels. Can the latest Johnny Depp paycheck- Movie. I mean movie. Bring back the fun adventure that was the first?

As soon as you sit in your seats, and the movie starts. You realize, has thirty minutes passed? Has anything really happened yet? The movie opens with a lot of exposition as there are a lot of plot lines that get juggled around. For me, most of them get lost and you forget about them almost instantly. Some plot lines and exposition amounts to almost nothing in the end. However, the first act does deliver one of Jack Sparrow’s funniest reveals, and one of my favorite heist scenes I’ve seen in a long while.

The movie tries to accomplish a lot without a whole lot of structure. Many characters don’t have a solid arc. It’s just a big blockbuster of things happening, and rules being added along the way.

I will say this though. If you are a Pirates fan, or if you are just there to see Jack Sparrow do Jack Sparrow things then this is your movie. I could never fully jump on the Pirates of the Caribbean train, but I know there is an audience.

People in my theater were dying of laughter, applauding, and I even heard sobbing at some points. Not saying anything against them. The movies have a specific audience it seemed to hit home with.

Overall I give it three Johnny Depp paychecks out of ten. If you are looking for a glorious end all epic, to send home this now five movie franchise, maybe wait for this one to hit Netflix later. If you love seeing Jack Sparrow steal bottles of rum, and have been a fan since the beginning. You’ll probably enjoy this flick.