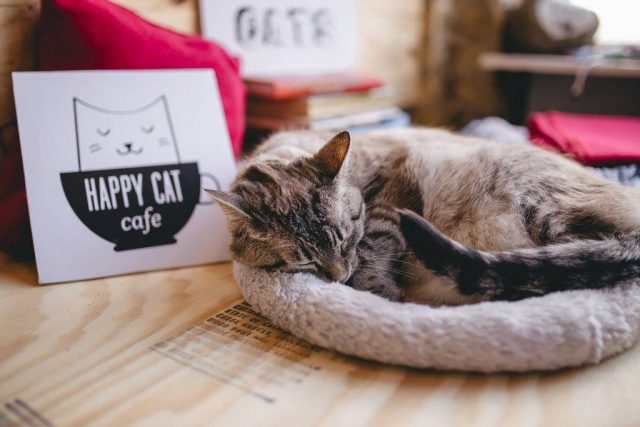 Grand Rapids is just a few weeks away from welcoming its first cat cafe.

The Happy Cat Cafe was first dreamed up in the summer of 2015 on Kickstarter by Kati Palmurkar, 28 of Grand Rapids and her husband, Adarsh Palmurkar, 31 of Grand Rapids. The pair plan to open the cafe in July. The cafe is located at 447 Division Ave.

From start to finish, the entire process has taken about two years. The couple searched for locations until February of 2015, and from there it took about a year for them to get their permits. The next step was the construction of the cafe.

“Technically we are operating right now, but we don’t have air conditioning in here yet,” Palmurkar said. “That is hopefully going to be installed in three weeks, so we will be opening the cat room in about a month and the whole cafe will be done at the end of July.”

The cafe is partnering with Uncommon Coffee Roasters, a company based out of Saugatuck, which will provide hand selected coffee beans.

Happy Cat Cafe will serve espresso, drip coffee, tea, bottled beverages and possibly iced coffee. The cafe will also be featuring a handful of local bakeries that have yet to be decided on.

“It’s technically not feasible to operate with cats and food in the same room,” Palmurkar said. “It’s written in the handbook that there are no animals allowed near food.The health department can’t allow it, so we had to find out how to make it work.”

It was decided that the cafe will have two rooms. The cats will be kept in a smaller room that is completely closed off from the cafe. The cafe will be on the other side of the cat room wall.

Customers can come into the cafe and buy coffee or food and then they can go into the cat room and play.

“My husband was the person who introduced me to the idea of opening up a cat cafe,” Palmurkar said. “I knew that they were big in Asia, but when I saw one open in California, I kind of thought that it might work in Grand Rapids and he pushed me to give it a try.”

Palmurkar is a Grand Rapids Community College and Grand Valley graduate with a degree in biology. However, more recently she took an entrepreneurship class to help her with owning a business.

The cafe is partnering with Carol’s Ferals, a local shelter that traps, neuters, and returns(TNR) cats. It’s main focus is to control the feral cat population.

“Once in awhile they find kittens or super nice cats, which are the ones that are sent to us,” Palmurkar said.

There will be around 10 cats in the cat room that are all adoptable. Customers can find applications on the Carol’s Ferals website.

To raise awareness about the cafe and Carol’s Ferals, the cafe has been hosting cat yoga in the cat room. They started hosting the yoga at the end of May and plan to continue hosting yoga after they open.

“We have also done other events like game night,” Palmurkar said. “Also hoping to get a license for a movie night and possibly a tavern license for a wine night.”

The cafe plans to be open seven days a week, but have a day for the cats to rest.

For those who are skeptical about going to the cat cafe, here are some ways that cats can improve your day.

The number one benefit is that cats can reduce someone’s stress and anxiety. A variety of studies have showed that a cat’s purr can also help with bone and joint health.

The frequency of a cat’s purr vibration ranges between 20 – 140 HZ, and frequencies ranging between 18 – 35 HZ have shown to have a positive effect on joint and muscle mobility as well as bone healing.

With the cat cafe being so close to GRCC, what could be better than destressing with a warm cup of tea in hand and a furry friend with healing powers in your lap?

“We are very excited to open and hope to attract many cat lovers like myself,” Palmurkar said.