Wednesday President Donald Trump started the morning off with a controversial announcement over Twitter,Trump claimed that he will not allow that transgender U.S. citizens cannot  enlist in the military under any branch.

Trump stated that the reason for this is that the transgender citizens have a “tremendous medical cost” and would be a “disruption.” The tweet seemed to have appeared out of nowhere, and Trump’s administration has yet to make a formal press announcement explaining how this change would be handled. 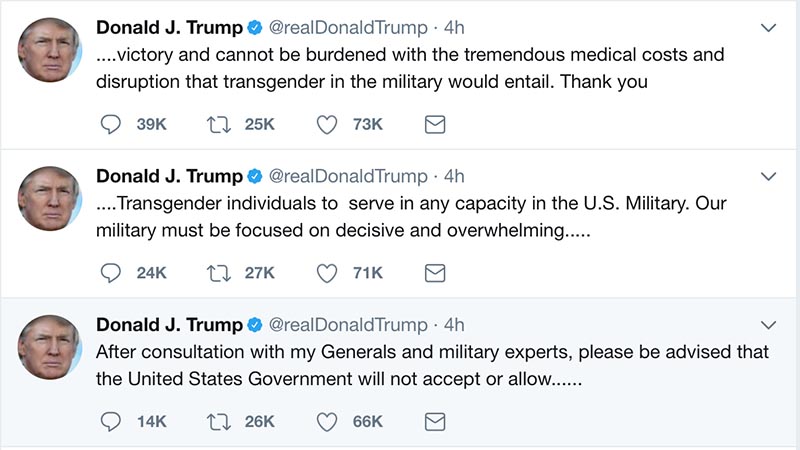 On the Grand Rapids Community College Campus, students were asked to Trump’s tweets.

Anna Lavus, a student originally from Ukraine, disagrees with Trumps belief that transgender Americans should not serve in the military.

“I think that’s really not nice,” Lavus said. “I mean like how can you discriminate people like that? I mean there are people in the military that serve you, and you are saying that they can’t be there because they are transgender? I don’t get what costs he has to pay for them.”

The costs Lavus was referring to is what the military has to pay for the transition costs of their transgender members who wish to go through hormonal therapy. The total cost per year averages out to be $8 million. This total is less than a percent of what the total amount of military spending. When Lavus was informed of this statistic, she said, “That makes no sense.”

President Trump is known for his Twitter feed where he makes many controversial claims and what many consider to be rude and unprofessional comments.

“The thing that really bothered me is that it was on Twitter, which seemed childish, Lavus said. “He should have done that on the news.”

Many GRCC students seem to share this viewpoint that transgender citizens have the right to serve on active duty in the military if they so please.

“I don’t see how that really affects our military or any of our branches. Because one it’s saying that just because you are switching genders you are not fit to serve the United States as a whole. I don’t believe in that” said GRCC student, Elever Groendyk.“I believe that whoever you are, whoever you believe to be, you are able to serve if you are well enough, If you are physically able to.”

Catrice Thronton, a GRCC student from Midland, Michigan, disagreed with President Trump’s tweets.“The fact is they are people, and they are just as valued as any other people,” Thronton said. “If someone has a sexual orientation, or a gender that you don’t agree with, no one is asking if you agree with it.No one is asking you to support it. No one is asking for you to be excited for it. You just have to accept it.”

“He’s been blocking people, and legally the federal law is that if he is going to make announcements that are about state or federal law business it has to be open to everyone,” Thornton said.“… If he’s blocking people because he is upset at them, he is now blocking them from their right to know what’s going on in the government.”