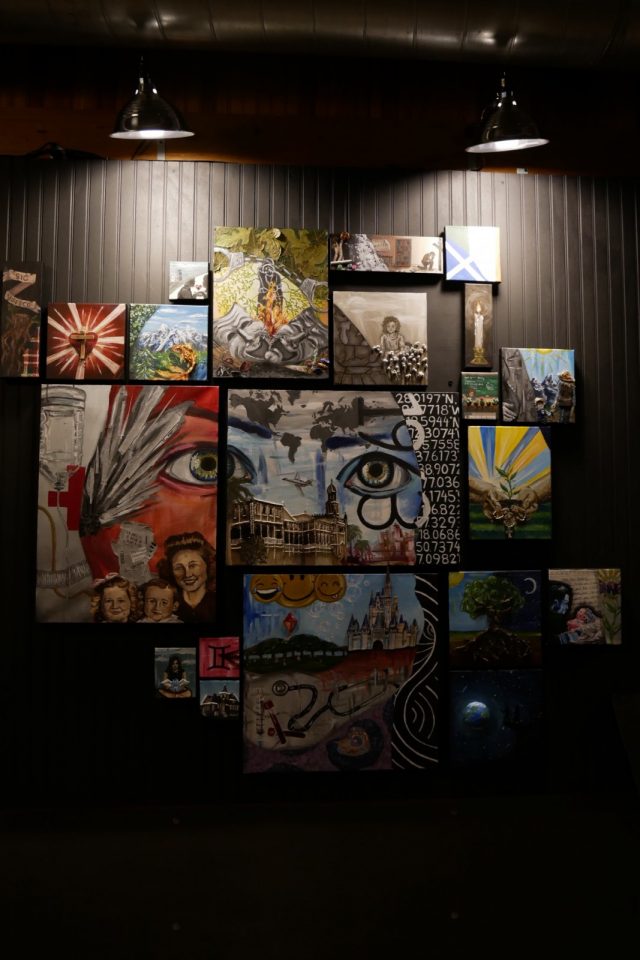 For 23 year-old Kendra Christie, an artist from Grand Rapids, art has been considered a bit of a legacy within her family. Both of her grandmothers are artsy, as well as her mother being “creative and clever”, as she puts it.

Christie has always looked up to her sisters and admired their talents. When she was a freshman, she came to the realization that she loved art and wanted to learn more about it. Christie decided to dual enroll at Kendall College of Art and Design during her junior and senior years of high school, and studied a little at Grand Rapids Community College.

Her current piece in ArtPrize is entitled “Origins.” It’s made with acrylic on a canvas, but it is considered mixed media due to 17 out of the 21 canvases having a multimedia aspect to them. She had been working on it since mid-April 2017.

According to Christie, her inspiration for this piece is her community.

“So many people have invested into my life, and I really wanted to honor them and show them how grateful I am for how they have helped make me who I am,” Christie said.

This is her second year in ArtPrize. She entered a piece in ArtPrize seven with a piece made from cosmetics. Her reason for entering this year, however, was based on her inspiration. She wanted to honor her community publicly. She also entered because she loves ArtPrize.

“ArtPrize brings a love of art, and a joyful vibrance to the city of Grand Rapids, and I love being a part of it.”

Christie says that if she won, she would give back to her community, as that was what  encouraged and motivated her to become who she is today and is what her entry is all about. She would also use the money to help her and her soon-to-be husband’s future.

“Art is a niche I’ve found, and I hope to be able to serve God through it, and help others find the same joy in it that I have,” Christie said. “I like that I can express more complex emotions and messages through art than I might be able to by word alone. It connects with people on an emotional level, and I think that’s beautiful.”