While the nation is focusing on the aftermath of the Nov. 5 mass shooting at a Texas church that killed 26 people, the 2017 shooting and homicide rate continues to increase at an alarming rate in Chicago.

Roughly three hours away from  the Grand Rapids Community College campus, gun violence is taking a toll on the Windy City.

According to a Nov. 6 report by the Chicago Tribune, this year 3,189 people have been shot so far this year.

The Collegiate staff went out to discuss these staggering statistics with students around campus.

The number of shootings in Chicago came as a surprise to some students.

Aaron Crook, 24 ,of Allendale, said, “I didn’t know the numbers were that high and shootings were that bad.We seriously need to enforce more rules upon our gun laws.”

Crook, who is currently serving in the National Guard, said he felt that “last year it was safer to be deployed in Afghanistan than to live in Chicago.”

Some students, like Chloe Stegman, 19, of Grand Rapids, however, weren’t so surprised by the numbers.

“(A) high number is expected since it’s Chicago,” Stegman said.

Some students think that stricter gun control laws are the solution to the problem.

“More elaborate background checks, or withholding the ability for people to get guns as easily as they can now,” is a solution offered by Victor Ott, 19, of Grand Rapids.

Sherrelle Padron, 25, of Grand Rapids, shared her thoughts about what we can do as a society to stop the violence while recognizing it’s a challenging situation.

“Speak up when we see suspicious things,” Padron said. “It’s kind of difficult for you and I to do something because we aren’t a part of the community.”

Dre McGhee believes that education is part of the solution, and that gang affiliation and lyrics that glorify violent behavior should be avoided.

“I was unaware of that number,”he said, referring to Chicago’s shooting rate. “We have to teach kids violence is wrong in the schools. Listening to rap music and gang relations needs to stop.” 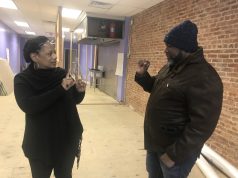