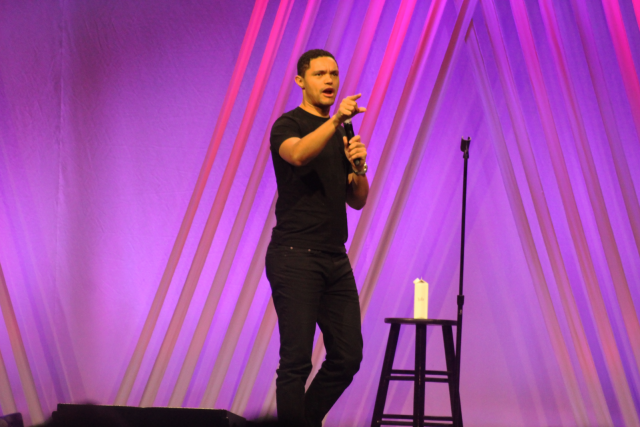 Trevor Noah played to a sold-out crowd at the DeVos Place on Saturday night as part of LaughFest 2018.

Angelo Lozada, Noah’s opening act, warmed up the audience by asking those nearby who attended the signature event dinner prior to the show about the organizations they represented. Of those in attendance were members of the Gerald R. Ford International Airport, Meijer, Yesterdog and more.

Noah acknowledged being in Michigan in his opening bit, and let the audience know what he was warned about Michigan before making the trip.

He was warned, “Whatever happens, look out for the farms.”

The warning was received with many laughs from Noah and the audience.

Noah replaced Jon Stewart as host on “The Daily Show” in September 2015, and  since then has risen to fame with his political humor and observational comedy on moving to the United States from South Africa.

While Noah touched on many topics, some more serious than others, each was delivered with humor and discretion.

Of course Noah’s show wouldn’t be complete without some political humor thrown into the mix. During the show, Noah mentioned the recent school shootings and how some want to give teachers guns in order to solve the guns in schools issue.

“I traumatized my teacher,” he joked. “The last thing she needed was a gun.”

Then he went mentioned what it would be like having AR-15’s in classrooms. “Are they (teachers) going to use AR’s as a pointer?”

Noah also quipped about meeting former President Barack Obama for the first time and his views on t President Donald Trump’s presidency so far joking, “There’s terror and there’s joy. We’re learning about the presidency at the same time as him (Trump). It’s a shared experience.”

Noah kept the audience laughing with his personal stories of moving to America and experiencing a new culture and language, citing that “English” and “American” were different languages in some cases like with the word “wife-beater.”

The show ended with Noah recalling the first time he ate tacos, not knowing what they were and being skeptical about eating them from a truck. The laughs kept on rolling.

Noah’s show helped Gilda’s Club raise money for their various free cancer programs. Including the proceeds of Noah’s Saturday night show, which exceeded $72,000, LaughFest has raised over $107,000 for Gilda’s Club.

After the show members of the audience had high praise for Noah.

“Trevor was incredible,” Feyen said. “All his jokes were very creative.”

“I love Trevor Noah,” Mathews said. “His sarcasm and the balance between his sarcasm and his political wit is, like, right on target. It’s not offensive, it’s true, and it was funny.”

In the audience was also local celebrity chef Jenna Arcidiacono of Amore Trattoria Italiana, a restaurant in Grand Rapids, who shared her experience at LaughFest and Noah’s show.

“I’ve been to LaughFest, I try to come every year, and every year it’s amazing,” Arcidiacono said. “Trevor Noah was amazing, so I’m glad I got to be a part of tonight.”

Arcidiacono, who will soon be appearing on The Food Network, was also appreciative of Noah’s humor.

“I think he was trying to be sensitive to Grand Rapids,” Arcidiacono said. “He made his point without trying to offend people which is great. I think he’s super charming and super fun.”